A look at the moral panic enveloping Jamaica in the wake of Brendan Bain’s dismissal as CHART head.

Jamaica is in the throes of a full blown moral panic. Three times a week since mid-May demonstrators clad in black have been assembling in front of the University of the West Indies (UWI), praying and carrying placards urging passers-by to honk in support of their campaign. Some have even taped their mouths to signal that this is a freedom of speech issue.

If you guessed that the protest might have something to do with the serious ills threatening this Caribbean society—rampant criminality, paedophilia, human and narco-trafficking, extra-judicial killings by the police and a crippling national debt among others—you would be wrong. The protest is indirectly fuelled by fear that an international ‘gay lobby’ is gaining ground in Jamaica as manifested by the termination of contract of a former UWI Professor from his post as head of  the Caribbean HIV/AIDS Regional Training Network or CHART as it is popularly known.

According to the University of the West Indies, CHART CEO Brendan Bain had to be removed from his leadership position after the majority of stakeholders in that organization declared they had no confidence in Bain’s leadership anymore. What prompted the no confidence vote was testimony provided by Bain in a Belize court case, on behalf of a Church group that was arguing for the retention of that country’s buggery laws. This was felt to be in direct contradiction of CHART’s mandate to improve delivery of HIV treatment in the region by reducing the stigma attached to the disease. There is widespread medical consensus based on extensive research that stigmatization and intolerance of men who have sex with men (MSMs) have helped to intensify the spread of the disease as those afflicted with it are afraid to ask for medical help. The Caribbean and sub-Saharan Africa which have the highest rates of HIV infection in the world are irrefutable proof of this.

Disregarding these facts Bain’s supporters have turned the situation into a circus about freedom of speech. Their contention? That Bain should have been free to give expert evidence based on his “research” and that by rescinding his contract the university had bowed to the dictates of an internationally constituted “gay agenda”.

Jamaica’s leading newspapers have provided daily fodder to support these protests in the form of provocative anti-gay cartoons, columns and articles. An atmosphere of near hysteria prevails with all the radio stations besieged by callers self-righteously denouncing the ‘gay agenda’ that is about to derail this virtuous, God-loving country. Virtually every day another scandal rocks the nation. A male jogger is raped by a gang of men! A few days later a 16-year old boy who tried to buy a tube of lipstick is nearly lynched by a mob and has to be rescued by the Police. Practically the next day Jamaicans for Justice, the local human rights group, is accused of attempting to “sexually groom” minors in the state’s care by providing them with special text books modified to include information on anal and oral sex. 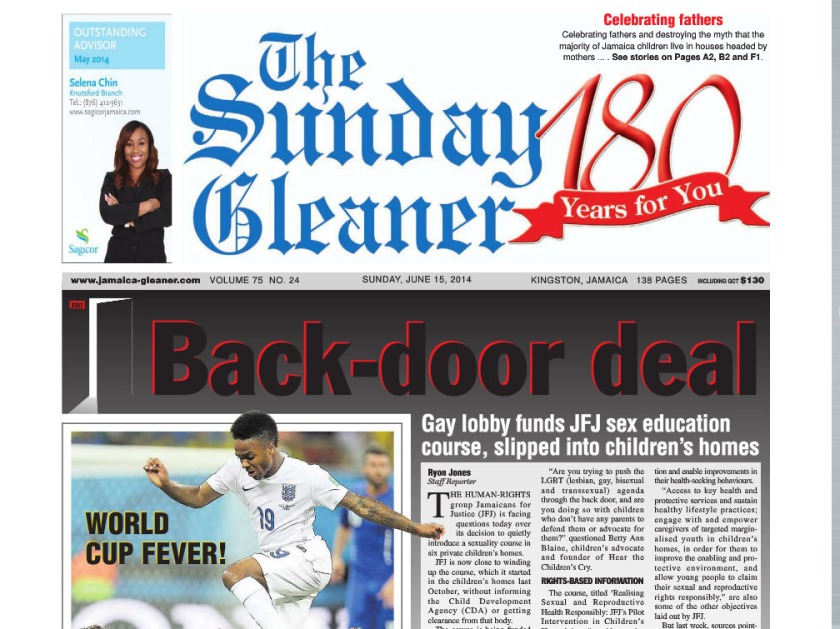 Improbably a morning radio host on Newstalk 93 claims that the furore over sex education has NOTHING to do with homosexuality or gay rights and everything to do with the rights of poor, vulnerable children. Yet such concern for children’s rights and for the welfare of children in state homes is unprecedented. Was such a declaration made when the sexual violence that is the norm at these homes was exposed in the media a mere two months ago? Are these armchair moralists aware that the majority of children at these farcical ‘places of safety’ are routinely buggered and raped, often by adult staff members? Where was the disproportionate outrage now being displayed over the education of these children when the Jamaica Observer detailed the kind of sexual abuse young boys in one particular home were subject to?

According to a story by Karyl Walker in the Observer of April 9, 2014:

Horror stories of rape and sexual predation have long haunted children’s homes and one former student of the institution told the Observer that he had been raped by older boys many times during his stay there.

More recently, on June 9, 2014, Christopher Pryce wrote an anguished letter to the editor about what he called the ‘Boko Haramisation’ Of Jamaica’s children highlighting the alarming rate at which children are disappearing from their family homes.

Did crusading Christians undertake dramatic demonstrations against the government for its abject dereliction of duty in regulating children’s safety in these instances? Why not? Or does it reserve such protests for socially prominent members of high society who are removed from their cushy jobs?

If there is indeed such widespread concern over the education of children why don’t we express the same angst over the rape and buggery of their little bodies? The lessons in horror these children are taught, come not from any textbook smuggled into the curriculum by ‘the gay lobby’ but as a result of the vile predations of those entrusted with their care. Yet such flagrant violations earn no reaction– let alone action–from the innumerable Christian pulpits dotting this island or the churches braying so vigorously on behalf of Bain’s so-called rights.

Our Churches deal exclusively with the spirit such blatantly skewed reactions seem to say. We don’t care if your children are starving or being turned into sex slaves but rest assured we will police what their young minds and spirits are fed with the fervour of Ayatollahs. Your spiritual health is safe in our holy hands. For material well-being apply to your nearest Don and if necessary yield up your pubescent girl children. Remain confident that such children will go to their sexual slaughter with minds unsullied by the truth. Hallelujah! Pass the collection plate!

Jamaicans trying to come to grips with atheism on a TV show, Religious HardTalk 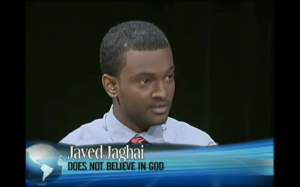 One of the stalwarts of the Jamaican public sphere is Ian Boyne, columnist, speech writer, pastor and host of TV programmes Profile and Religious Hardtalk. Last week he produced an exceptionally good episode of the latter looking at the subjects of Atheism and Secularism in religion-obsessed Jamaica (9/18/2012). It must be said that Boyne himself is a superb example of Christian practice at its best. He’s not afraid, as you can see from watching the video (linked below), to engage openly with views that depart drastically from his own. In the process he allowed time and space for a dissenting view rarely heard in Jamaica.
The two young people he had on were very articulate and gave a spirited critique of the kind of Christianity espoused in Jamaica and its insidious seepage into all areas of national life. One of them, @Chatimout or Javed Jaghai, has even gone so far as to start a group called Jamaicans for Secular Humanism for those like himself who want a space to articulate their doubts about the dangers of the all-enveloping, unquestioning forms of religiousity adopted by many Jamaicans. In fact its quite heretical in Jamaica to express the view that God might not exist or that there is something problematic about the de facto embrace of Christianity as a state religion.
I know a young man who as a child at St. Peters and Paul, a prominent Jamaican prep school,  innocently announced in class that he didn’t believe in ‘god’. He was then subjected to disbelieving, disapproving scrutiny all day by other teachers who would pop into the classroom to have the ‘godless’ boy, who was all of 8 years old, pointed out to them. I was reminded of this story when I noticed with amusement the caption under Javed Jaghai’s image stating baldly “DOES NOT BELIEVE IN GOD.” In fact so narrow and hidebound are Jamaicans in their practice of Christianity that this episode of Religious Hardtalk was not repeated at the normally scheduled time because the powers-that-be were afraid that schoolchildren might be exposed to such apostasy!
Fortunately the TV station has made it available online. I highly recommend it, in fact its a must see for anyone trying to understand Jamaican culture: