Mr Golding has now admitted to parliament that he authorised the hiring of a law firm to lobby senior US State Department officials on Mr Coke’s behalf Photo: AFP/GETTY (Daily Telegraph UK)

I feel it for Bruce Golding. Who could have predicted the woes that would befall his first two years as Crime Minister, er, oh, LOL, i mean Prime Minister. I know what his wife Lorna means when she says we must read between the lines because he isn’t free to disclose everything. My first reaction when i heard that he had admitted sanctioning the Manatt, Phelps ‘initiative’ from the get-go was that someone or something had forced his hand. Only something far worse staring him in the face could have made owning up to having played fast and loose with the truth seem like the better alternative.

And i feel it for him because this turn of events has nothing to do with him personally, or the Jamaica Labour Party for that matter. It’s just the way the cookie crumbles in countries that are well on their way to being narco-democracies. I’m amazed at the amount of moral indignation being directed at the PM by members of the media. C’mon! It’s not a matter of morality is it? It’s a matter of how to decriminalize a country. Not easily done. The Colombians might have a tip or two and the Haitians. Forget about decriminalizing ganja or gay-ness, this is an entire country that has been hijacked by criminality. How is a government to cope?

Granted the PM could have handled the entire matter differently from the beginning. But he was playing by the old rules like all politicians have done so far. And he’s been jerked to reality by the powers-that-be. This is a power struggle. That’s what we have to realize. And to win this power struggle we need the new, the young, the strong and the able…because only they know how to negotiate the new rules that are now in effect. Alas, our criminals too are world-class and internationally competitive.

In the meantime a spurious facebook page purporting to be that of Dudus Coke is making the rounds in cyberspace. It’s a no holds barred version so if you’re under 15 or an Ayatollah or a member of Jamaica’s Moral Majority you might want to make a hasty switch to a less profane website. 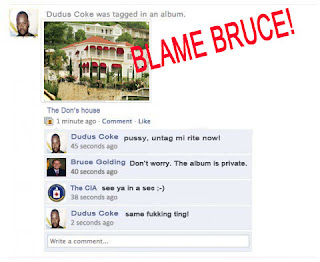 Finally, take a look at National Dish by Michael ‘Flyn’ Elliott below. As a painted image it pretty much captures our predicament as a society. And for a variety of innovative takes or interpretations of the state we’re in you must visit the National Gallery’s Young Talent V which opened today. It is an exciting show that signals the resurgence of the visual art scene here. Here is a link to my photos from the opening.