loved this work at the India Art Summit but neglected to note artist’s name.
India Shining 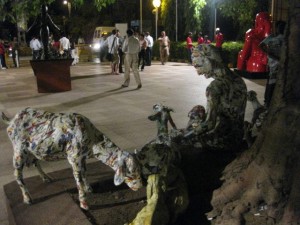 Landing in Kingston after five weeks away reminded me vividly of why I love returning to the Rock so much. As I waited with my lootcases and laptop for the offspring to arrive, I noticed two individuals hovering nearby. One of them sidled over muttering something that sounded like “Mi like yu eyes y’know, wicked eyes yu ave.” I complimented him on his prowess with lyrics while trying to return a basilisk stare.

“Well, a lady like you must elicit lyrics y’know,” growled the other wolf (trust me he actually did use the word ‘elicit’), approaching and shooing the first lyricist away. Before I could contemplate my next move, Worm, a taximan I occasionally use, appeared out of nowhere: “You look like you need to make a call” he said, slipping his cellphone into my grateful hands. And in two twos the offspring who had inexplicably been lurking a few cars away (“I thought you’d still have credit!”) appeared and whisked me off after the lyrical ones had manhandled my baggage into the trunk. A few bills were distributed hither and thither and off I rode into the Kingston night, thrilled to be back. 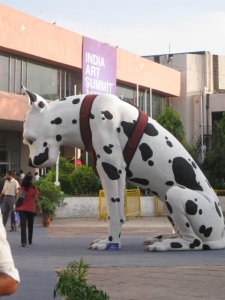 India was a trip and a half. The parents live in Bangalore and that was my base, a cool Southern city with a remarkable number of pubs, cafés and restaurants. From there I went to Kochi and Trivandrum, Kerala, for a week to visit extended family and friends. Then a week in Delhi to visit a cousin, more friends and the India Art Summit, an art fair and forum of discussions around the state of art in India.

Compared to art in Jamaica and the Anglophone Caribbean, Indian art is thriving, despite much hand-wringing and laments from sundry art interests who populated the rather expensively priced discussion fora. The pocket would only permit two sessions, consisting of four discussions or talks altogether. The standout speakers for me were Jitish Kallat, one of the most successful contemporary artists in India today and Geeta Kapur, the single-most respected voice on the Indian artscene speaking on Emerging Markets and Subversion, Perversity and Resistance respectively.

A panel titled The Role of the Gallery—The View from the Street turned out to be a riveting one as well when the matter of pre-eminent Indian artist M.F. Husain’s absence from the Fair was raised, provoking an impassioned debate about the role of the state in relation to the politics of art-making and the corresponding role of galleries. 94-year old Husain is in voluntary exile in the UK after a group of Hindu extremists declared the equivalent of a Fatwa on him for portraying ‘Bharatmata’ or ‘Mother India’ in the nude. Previously the artist had also drawn the ire of religious extremists with his depictions of Indian Goddesses in their birthday suits. This was one thing, but was it also necessary for his work to be kept from display at the Fair was the question posed.

Jab we meet by Saptarshi Naskar

With a panel including Sharon Apparao of Apparao Galleries, the venue where the offending artwork by Husain had originally been exhibited, the ensuing discussion was pretty intense. The Galleries unanimously maintained that they would have been happy to exhibit Husain’s work but were prevented from doing so by the organizers who had forbidden the work to be shown for security reasons. “We acknowledge the iconic stature of Husain, but are unable to put all
the people and art work at risk,” Neha Kirpal, associate director of the India Art Summit said in an AFP interview.

When asked about this at the Forum Kirpal explained that the organizers had tried their best to enlist the support of the Government security forces in protecting the Fair against possible terrorist threats but that the police had shown complete indifference, only complaining that they had not received their VIP passes to the fair (!). Under the circumstances it seemed unwise to court almost certain disaster by exhibiting M.F.’s work. 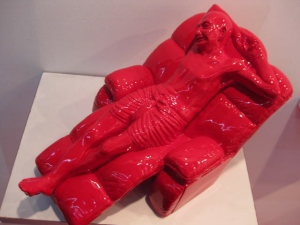 At the Emerging Markets forum Sotheby’s deputy director, Maithili Parekh, lamented the lack of an ‘art ecosystem’ as she put it—that is, the network of artists, curators, critics, dealers and gallerists required to maintain a functioning and healthy artworld. Self-titled ‘artworld worker’ Jitish Kallat summed it up as “a lot of art being viewed and very little art being reviewed.” Hmmmm, over here you would have to say–very little art being viewed and even less reviewed. Saying that serious cultural stewardship was required Kallat went on to observe that India has an “art scenario completely orphaned by an absent state.” The sharp-tongued artist also described the current recession as “a kind of greed tax”. 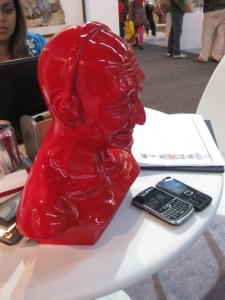 At the session on ‘difference’, cultural, sexual and otherwise, the next day, Geeta Kapur chided the Fair organizers for billing the Summit as “400 crores worth of art on display” (a crore is an Indian unit of counting equivalent to ten million). Vigorously embodying the spirit of resistance Kapur invoked Guy Debord’s 1967 tract Society of the Spectacle to dismiss the art fair as “the epitome of the idea of the spectacle” or “money which one only looks at”. In response to an art writer who had celebrated her ability to critique art without being in possession of an abundance of erudition (‘swallowing an encyclopedia’) Kapur declaimed that she would have liked to “perform an encyclopedia that I have swallowed.” In the final analysis she urged that exhibition sites such as India Art Summit be kept open for innovation. A slideshow of some of the work on display at the fair, courtesy Livemint.com, may be viewed here.

Another redoubtable interlocutor on the discussion circuit was Shukla Samant but enough about the words that were exchanged at India Art Summit. The best part of the Fair was of course, the art. I was struck by the number of artists who focused on Mahatma Gandhi as a suitable subject and by the sense of humour that pervaded much of the work. Graças à Deus there were not too many tormented, tortured bodies as would have appeared in the Caribbean or that sense of leaden solemnity that pervades much visual work here.

A fortuitous meeting with Singapore artist Ketna Patel (we were both staying at the India International Centre) introduced me to Siddhartha Tagore, the editor of Art and Deal and the artists in his circle, among them Vibha Galhotra, whose brilliant work Construction, Deconstruction and Reconstruction, drew much attention at the Fair. Other highlights were meeting Abhay Sardesai, editor of Artindia, photographer Gauri Gill and on old friend George Jose, now with the Asia Society. Hanging out with George at the Devi Art Foundation reception is a memory I will cherish for a long time. The fortress gallery of Anupam Poddar, the most canny collector of contemporary art in India (sometimes called the Indian Saatchi) was opened to summit participants one evening complete with bar, dinner and disco. An amazing collection of art letters between four Sri Lankan artists* and artwork by a Bangladeshi artist** were testimony to Poddar’s subcontinental vision, ignoring national borders in favour of a regional purview. Hint hint, Caribbean collectors who still confine their collections within national borders.

Through an Anish Kapoor, darkly

Back in Bangalore I gave a talk at Gallery Ske called Kingston Logic vs. The History Brush about Jamaican music, art and culture. It went down really well. Gallery Ske is one of the most interesting galleries in Bangalore/India along with No. 1 Shanthi Road, where I spent a little time. I also commissioned a portrait of the offspring as a Hindu deity, by Afsar Pasha, a billboard and sign painter of renown in Bangalore—Varun, as God of the Sea and water, his namesake—hopefully I won’t be targeted by religious extremists, after all Pasha is a Muslim while I’m a Syrian Christian by birth.

So much more to tell, but here finally is the first installment…from India…with love.

*”‘The One Year Drawing Project’ is an experimental drawing exchange that takes the form of an artists’ book, involving four of Sri Lanka’s most critically acclaimed artists- Muhanned Cader, Thamotharampillai Shanaathanan, Chandraguptha Thenuwara and Jagath Weerasinghe. It comprises 208 drawings created by the artists in response to each other’s works. From May 2005 to October 2007 these artists exchanged drawings via post between Jaffna in the north of the country and the suburbs of the capital Colombo.” (from Devi Art Foundation website)

**”Mahbabur Rahman, 40, is a painter and performance artist, a key figure in the Bangladeshi art scene. Setting his performances within larger installations, Mahbub often uses his own body as material. Some draw from literary references – a performance titled Transformations (2004) is an enactment of a story by Bangladeshi writer and poet Syed Shamsul Haq about an indigo farmer who was forced to plough his field with his own body.” (from Devi Art Foundation website)