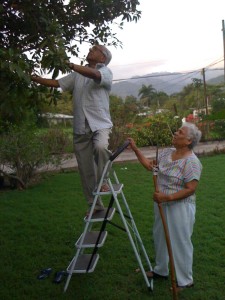 The parents trying to beat their rivals, the rat bats,

to the fruit of this chikoo or naseberry tree.

The parents were just here on a visit. This was probably their ninth or tenth time here and they spent two and a half weeks during which my Dad celebrated his 80th birthday. It’s quite amazing having your parents depend on you for a change, however briefly. Well, of course, assuming that you aren’t normally one of their main sources of support. One of my friends, all of 25 years old, is putting his Mom through university. Seriously. Not for nothing is he known as Biggy.

My parents, on the contrary, like most Indian parents, want to look after us from the cradle to the grave, if possible. Try telling them that you CAN cross a road alone by now or that you figured out how to use the toilet without their help some decades ago. They just won’t buy it, they’re still in instructional mode. Do this, don’t do that, if you do this remember that etc…What is your cholesterol level, they demand and your bank balance. I mean one can’t complain especially if they’re given to enhancing the latter from time to time.

At the age of 80 my father is moving like a 60-yr old. Resident in Bangalore he was in Turkey the week before leaving for Jamaica and in Manila the month before–on work, no less. In fact the parents arrived bearing Turkish Baklava among other things, a delightful way to gain weight, if you must.

Unfortunately for them it wasn’t just my son and me who were delighted to receive the parents; a flotilla of mosquitoes also arrived to meet and greet them, extending their visit to the duration of their stay. Even the heat waved at my parents though on my father’s birthday, April 11, the drought finally broke. Everything is now satisfactorily green and the water shortage has briefly abated.

One of the things i had asked my parents to bring me from their home in Bangalore was a beautiful rosewood plaque my Dad was given by the Indian Institute of Management, Ahmedabad (IIMA) (see above), when he retired from there in 1984. The plaque is a replica in silver and rosewood of the stunning Siddi Saiyad Jaali, one of the screen windows at the Siddi Saiyad mosque in the centre of the old city. The arched, semicircular window portrays a beautiful Peepal tree with curving, sinuous, intertwined branches, intricately carved out of yellow stone to give the effect of filigree. There is also a palm tree in the centre. It is a stunning example of sixteenth-century stone tracery decorating a mosque built in 1573 by a Siddi General. The Siddis are Africans who have been living in India for centuries. More on them in a future post.

When IIMA was set up in collaboration with the Harvard Business School in the early 60s its logo incorporated a simplified version of the Sidi Saiyad Jaali. I wish i knew who the designer was. Whoever it was I’m grateful to them for presenting me as a child with this fine exemplar of graphic design, this ingenious conversion of a centuries old emblem of vernacular visual culture into a twentieth century symbol or trademark. It signalled the best possible use of India’s iconic ancient heritage, yoking it with modern typography to produce a memorable brandmark for one of India’s most avant garde institutions. To this day the IIMA logo remains a most elegant and sophisticated trademark, an ingenious marriage of the Oriental, the Islamic and the modern.

Louis Kahn designed the IIMA campus see above; note the arched windows echoing the numerous arches to be found in traditional Ahmedabad architecture.

I had the good fortune to grow up in Ahmedabad, specifically on the campus of the Louis Kahn-designed IIMA where my father worked from 1963 to 1984. “According to the Economist‘s survey of global business schools in 2009, IIMA is considered to be the “toughest in the world to get into” as over 600 people compete for every seat.” One of its earliest graduates, Batch of ’66, was CK Prahalad whose untimely demise last week shocked management circles all over the world. Dr. Prahalad was the author of the New York Times bestseller, “The Fortune at the Bottom of the Pyramid: Eradicating Poverty through Profits”.

As the Hindu put it:

Coimbatore Krishnarao Prahalad, 68, Distinguished Professor in the Ross School of Business at the University of Michigan, and a world authority on management thought, passed away on Friday in San Diego after a brief illness. He was known for his work specialising in corporate strategy focussing on top management in large, diversified, multinational corporations.

Professor Prahalad’s seminal work, alongside Gary Hamel in the 1990s, on the concept of “core competence” of companies won the McKinsey Prize and sold the maximum number of reprints in the entire 80-odd years of history of its publisher, the prestigious Harvard Business Review.

In his paper with Hamel, he urged corporate leaders to think of diversified company as a tree: “The trunk and major limbs as core products, smaller branches as business units, leaves and fruit as end products. Nourishing and stabilising everything is the root system: core competencies.”

He was also known widely for his interest in the “Fortune at the Bottom of the Pyramid” and his book on the subject is considered an authoritative exposition of the potential for large corporations to improve the conditions of the poor in countries such as India. They could do so, he argued, by “mobilising investment capacity [along with] the commitment of NGOs and the communities that need help.” The poor must become active, informed and involved consumers, he urged.

Yet Professor Prahalad’s illustrious career was not restricted to academe: he equally established his reputation as a corporate consultant par excellence, working with a wide cross-section of companies from the CEOs of the top 30 Fortune 200 firms to Hindustan Lever Limited and Microsoft Corporation, India.

Very few people know that CK was my Dad’s student and protege in those early years at IIMA. By the time he graduated CK had impressed his professors enough for them to arrange for him to proceed to Harvard to get a Ph. D in Business Administration. IIMA underwrote the expenses on condition that CK return to teach there for a minimum of five years when he obtained his doctorate.

As agreed CK came back to teach at IIMA in the mid-seventies; by then my father was director of the Institute. Soon after returning CK received an offer from University of Michigan to teach there, one he apparently couldn’t refuse. He left IIMA before serving the full five years of his bond, a fact the Ahmedabad newspapers made a lot of at the time, with headlines such as “IIM Professor leaves country like a thief in the night.”

For years after that when i heard news of CK’s successes in the US I would relay it to my Dad but he would make a wry face and turn away. He had been sorely disappointed by CK’s premature departure from IIMA and never quite forgave him. But when i told him on the morning of April 17th after checking my twitter feed that CK had passed away in San Diego the day before he was visibly shocked and sorrowful.

Although he didn’t complete his tenure at IIMA CK Prahalad did repay the money that had been spent on his Harvard education. And with his stellar career, his championing of the poor and India and the mark he left on the world CK more than repaid his debt both to IIMA and the country i think.

It was an eventful two weeks while my parents were here. The day after news of CK’s death broke came news of Shashi Tharoor’s resignation from the Indian cabinet. Again i caught it on Twitter as it happened. Tharoor may have left national politics but he will be back, trust me. ST was at St. Stephens’ College when i was at Lady Sri Ram College at Delhi University from 73-76 and he was already a personality then. He topped his batch at DU and became President of St Stephens’, then a ‘men only’ college. His class notes were greatly in demand and being the consummate politician he seems to be, he never turned down a request for his famous notebooks, generously turning them over to those who requested them. It was discovered much later that he had two sets of notes; one set especially prepared as a loaner for circulation and his own private notes, never circulated, with which he aced his exams. A man like that doesn’t quit in the first round, even if he suffers periodically from irrational exuberance. He will be back, whether in politics or some other arena.

Finally, Twitter was abuzz last week with Arundhati Roy’s recent entry into the tweeting classes (this was later discovered to be a fake account but with a beguiling twist. read my post on it here). Calling herself @Arundhati_Roy the author of The God of Small Things surefootedly negotiated Twitter, charming journalists such as @KanchanGupta who had been cursing her only the week before. @KanchanGupta purred @Arundhati_Roy. We must. You look like a dark liquor on the rocks kind of man…

People seemed to doubt that it was really her but i didn’t need persuading, I recognized her voice immediately. “Flags are bits of coloured cloth that governments use to first, shrink wrap people’s brains and then as ceremonial shrouds to bury the dead.” “Little events, ordinary things, smashed and reconstituted. Imbued with new meaning. Suddenly they become the bleached bones of a story.” And something i profoundly agree with her on: “Democracy is the biggest scam in the world.” Last week Thursday Roy only had 75 or so followers, today its 905. Let’s see how many more she attracts by the time she really gets going.

With the exception of Prahlad, all the principals in this blogpost are from Kerala, India’s most unique state, a state that you must look out for, the first state in the world to freely elect a communist government, a state that is maddening and inspiring all at once and where i happen to have been born and where my roots lie. It is a state like Jamaica that exports its people far and wide, while welcoming people from around the world to the self-titled splendours of God’s Own Country.

Arundhati Roy on Obama’s Wars, India and Why Democracy Is “The Biggest Scam in the World”
– Watch more Videos at Vodpod.