Trivandrum architecture and political symbols Sep 21, 2011, a set on Flickr.

Yesterday was the 45th anniversary of a historic moment in Jamaica. On April 21, 1966 His Imperial Majesty, Emperor Haile Selassie of Ethiopia visited Jamaica to a tumultuous welcome, thrillingly captured in the film footage above. The Emperor might not have fully grasped what he meant to the Rastafarian community in Jamaica who regard his birth as the Second Coming itself. The passages below from the Wikipedia entry on him convey a sense of the excitement caused by the diminutive Emperor’s arrival in Jamaica:

Haile Selassie visited Jamaica on April 21, 1966, and approximately one hundred thousand Rastafari from all over Jamaica descended on Palisadoes Airport in Kingston,[127] having heard that the man whom they considered to be their Messiah was coming to visit them. Spliffs[130] and chalices[131] were openly[132] smoked, causing “a haze of ganja smoke” to drift through the air.[133][134][135] Haile Selassie arrived at the airport but was unable to come down the mobile steps of the airplane, as the crowd rushed the tarmac. He then returned into the plane, disappearing for several more minutes. Finally, Jamaican authorities were obliged to request Ras Mortimer Planno, a well-known Rasta leader, to climb the steps, enter the plane, and negotiate the Emperor’s descent.[136] Planno re-emerged and announced to the crowd: “The Emperor has instructed me to tell you to be calm. Step back and let the Emperor land”.[137] This day is widely held by scholars to be a major turning point for the movement,[138][139][140] and it is still commemorated by Rastafarians as Grounation Day, the anniversary of which is celebrated as the second holiest holiday after 2 November, the Emperor’s Coronation Day.

From then on, as a result of Planno’s actions, the Jamaican authorities were asked to ensure that Rastafarian representatives were present at all state functions attended by His Majesty,[141][142] and Rastafarian elders also ensured that they obtained a private audience with the Emperor,[143] where he reportedly told them that they should not emigrate to Ethiopia until they had first liberated the people of Jamaica. This dictum came to be known as “liberation before repatriation”.

Haile Selassie defied expectations of the Jamaican authorities,[144] and never rebuked the Rastafari for their belief in him as the returned Jesus. Instead, he presented the movement’s faithful elders with gold medallions – the only recipients of such an honor on this visit.[145][146] During PNP leader (later Jamaican Prime Minister) Michael Manley’s visit to Ethiopia in October 1969, the Emperor allegedly still recalled his 1966 reception with amazement, and stated that he felt that he had to be respectful of their beliefs.[147] This was the visit when Manley received the Rod of Correction or Rod of Joshua as a present from the Emperor, which is thought to have helped him to win the 1972 election in Jamaica.

I find the film footage of Selassie’s arrival in Jamaica and his tour of the Jamaican parliament, the University of the West Indies, Montego Bay and other places in Jamaica tremendously moving. Scholars like Louis Lindsay have claimed that Jamaicans would never recieve African royalty as enthusiastically as they recieved the Queen of England. But the footage above gives the lie to that. It wasn’t only at his arrival by plane that throngs descended to get a view of him, everywhere he went in Jamaica vast numbers of excited people turned out to get a sight of his Imperial Majesty.

Curiously Emperor Haile Selassie also visited the land of my birth, Kerala, India, several times, the first time the year i was born, in 1956. No, he didn’t come to anoint me but came to see for himself the Orthodox Christians of Kerala, the Syrian Christians as they are known, the community that i happen to have been born into. Abraham Varghese, the author of bestseller God’s Own Country described the circumstances of the visit in an Observer article:

Whenever I hear the phrase “geography is destiny” I think of my parents, George and Mariam, schoolteachers from India, arriving in the misty mountain empire of Ethiopia in 1951 within two weeks of each other and not knowing a soul. They were there because another traveller, Emperor Haile Selassie of Ethiopia, happened to be on a state visit to India shortly after his country was freed from Mussolini’s occupation. Haile Selassie, head of an ancient Christian nation surrounded on all sides by Muslim nations, knew of the legend of Saint Thomas’s arrival in south India, on Kerala’s shores (which took place 1,600 years before the Portuguese brought Catholicism to Goa). Saint Thomas made converts of the Brahmins he encountered. Their descendants, the Syrian Christians (so called because they owed their allegiance to the Church in Antioch) are the community to which my parents belong. The Emperor wanted to see those first churches, and his motorcade happened to drive through Kerala at the hour when the roads were thronged with legions of schoolkids in uniform.

It was that sight, so my parents say, that so impressed Haile Selassie that he hired all 400 of his first batch of teachers for the new schools he was building across the empire from this one state in India. To this day, almost every Ethiopian you meet abroad who is over 40 years of age will tell you that they had an Indian teacher in their school, someone with an Old Testament name such as Thomas, or Jacob, or Zachariah, or Verghese (the latter derived from Giorgis, or George). A change in their geography allowed Mariam Abraham and George Verghese to meet a few weeks after they arrived in Ethiopia and they eventually married. But it all began with what the emperor saw on a morning drive. The world turns on the smallest of things.

Teachers from Kerala are still imported into Ethiopia (one of my cousins taught there for many years) though i don’t know if they’re greeted with the gift of a gold sovereign anymore, as they used to be when Selassie ruled. Interestingly another Syrian Christian, Paul Verghese, who went on to become a Bishop (the Archbishop of Delhi of the Malankara Orthodox Church of India), was the Emperor’s personal aide for several years. In a long article chronicling the career of the Bishop there is an account of the relationship between the Emperor and the young man from Kerala who became his aide. In it I came across the passage below which i’m assuming refers to Jamaica and the Rastafarian community although some of the details seem hard to believe. Was there such a rebellion? Could it be a reference to the Coral Gardens Rebellion of 1963? Who was the Chief who chopped off the head of an orange and supposedly threatened the future Bishop? Will we ever know? At any rate its interesting to see how histories get garbled if not lost in translation:

But the average Ethiopian loved him, adored him, and one sect of people even believed that Hailie Sellassie was their prophet. Hailie Sellassie repeatedly told them that he was only an ordinary human being, but they wouldn’t accept it. They insisted that the prophecy specifically said that the prophet would deny that he was the prophet. Everything about Hailie Sellassis’s life fit the story of their Prophet. A group of such ‘believers’ rebelled against their government in an island state. They said that the Governor of that state had no authority over them; only Hailie Sellassie was their god-king. The Emperor sent Paul Verghese to this island state to tell them that Hailie Sellassie wanted them to know that the Emperor was not a prophet, as they had believed. After they heard the emissary, their Chief held an orange and a knife in his hands, chopped off the top of the orange, and threatened the messenger that his head could be chopped off just like that for bringing this ‘heresy!’ No, the Truth never appeals to blind fanatics! However, Paul Verghese wasn’t intimidated. He persisted and negotiated an end to the rebellion against the governor.

The Coral Gardens Rebellion (which happened on Good Friday, 1963), also referred to as the Coral Gardens Massacre because of the Jamaican State’s mass detention and torture of Rastafarians in its wake, was the subject of a public lecture yesterday by QC Hugh Small, just emerging from a starring role in the infamous Manatt Commission. It’s also the subject of a film called Bad Friday by Deborah Thomas, Junior Wedderburn and John Jackson. Listen to my interview with Deborah Thomas this Sunday at 10 am on The Silo, Newstalk 93 to learn more about Coral Gardens and what took place there nearly 50 years ago. There is also a book by a former policeman, Retired Detective Selbourne Reid, who gives an eyewitness account of the Rebellion.

I wonder if the survivors of the Coral Gardens Massacre, referred to as ‘the government-led pogrom’ by one testimonial, might have the right to claim compensation/reparation from the Jamaican government in the same way that the surviving Mau-Mau in Kenya are considering suing the UK government for the abuse meted out to them in the 1950s?

A short account of Onam, a festival from Kerala India and the legendary Snakeboat races that occur every year in celebration. 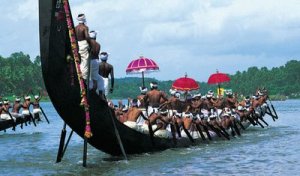 Kerala, where i come from in India, has just finished celebrating Onam, the closest thing we have to carnival. Every year for a whole week people celebrate harvest-time by welcoming back King Mahabali, a legendary ruler of ancient Kerala. Mahabali was an exemplary ruler, who put the welfare of his people above everything. Unfortunately he became so popular that the Gods became upset and banished him from the kingdom allowing him to return once a year just for a day which is celebrated as Onam. This year it was August 23rd and everyone was slightly distracted by the wedding of Shashi Tharoor, the famous tweeting minister, also from Kerala, to his third bride, Sunanda Pushkar, a Kashmiri, on Onam morning.

People cook magnificent feasts and lay down carpets of flowers in front of their homes to welcome Mahabali back. There are ceremonial dances and one of the highlights of the whole festival are the famed snakeboat races. Last year this time  i was in Alleppey with friends and attended the renowned Nehru boat race there. These races are awesome spectacles, i remember being taken to watch them as a child, when some of my uncles used to participate in them. Here are two videos to give you a taste of this extraordinary event.

Onam is celebrated by Hindus, Christians and Muslims alike.

As a fellow Malayalee (from Malayalam, the language spoken in Kerala) based in Dubai tweeted yesterday:

Below is a humourous video about celebrating Onam in the diaspora:

And here are three images from Kerala Tourism showing the splendours of this unusual little coastal state: 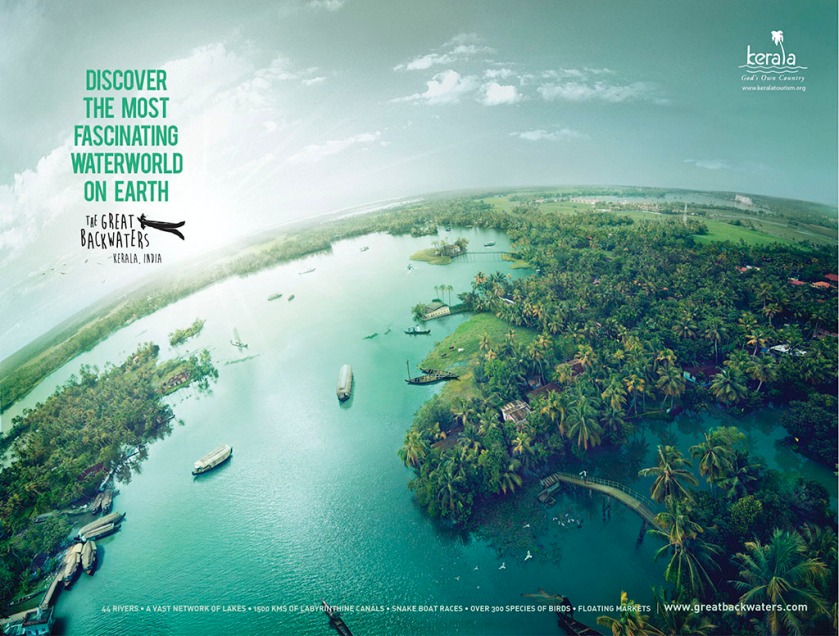 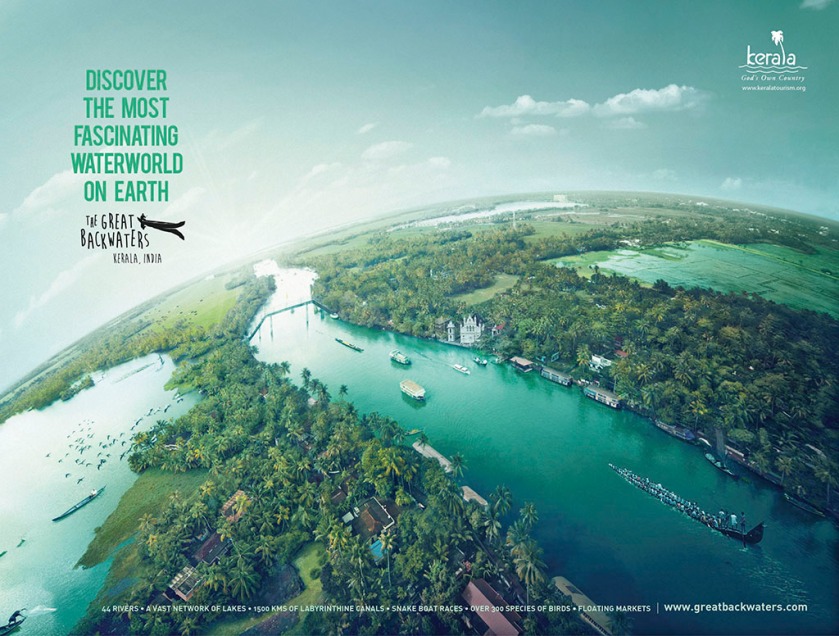