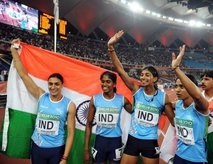 Well, Indians finally got a taste of what Jamaicans now take for granted. The Indian women’s 4×400 team came out of nowhere to beat competitors Nigeria, England, Australia and others to take the gold medal in an absolutely thrilling race at the recently concluded 19th Commonwealth Games.  As @greatbong said. Pure lump in the throat material. Legend. The video below is a must see:

Meanwhile did you know that hundreds of attempts were made to breach the Commonwealth Games computer networks in Delhi, most of them from China?

Six cyber networks of the Delhi Commonwealth Games faced at least 1,000 “potential” attacks in the 12 days of the event that concluded last night — that is, more than three attacks every hour.

Roughly three-fourths of these attempts to breach and paralyse the Games networks originated from China, experts in the Cyber Crisis Management Group (CMG), which was monitoring the networks round the clock, told The Indian Express.

A clutch of attacks — between October 3 and October 5 — originated in Pakistan. Some attempts to penetrate CWG circuits were made from Mumbai as well, top sources in the CMG said.

“In all, our systems detected around 5,000 incidents, about 20 per cent of which could be described as potential attacks. Many were ‘denial-of-service’ attacks, which, if successful, would jam entire networks. But none of these attempts succeeded in penetrating even the first of the three layers of cyber security systems that we had installed,” said a member of the CMG.

Another interesting post to come out of Delhi during the Commonwealth Games was the following one on a traditional form of Indian Gymnastics by Anjali Nayar:

After several minutes of watching the young gymnasts in the park, Uday Deshpande, the centre’s guru, asked me if I’d like to just “see” the ancient tradition or “see by doing.”

“I don’t know if I can do that,” I said, pointing to the young, limber woman in front of me. She was smiling as she wrapped her leg around the back of her head, all the while dangling from a rope.

“That’s my responsibility, not yours,” he responded optimistically.

And so, worried I’d rip my shorts (and body) in two, I stepped forward and, as directed, wedged the thick cotton rope between my toes and climbed it in three big strides.

Pain. Pain. Pain. That’s what it feels like to climb a cotton rope using the muscles in your toes, if you were wondering.

Deshpande whipped the rope around my body and, with great effort, flipped my legs over my head. I was the inverted snail I never quite imagined or wanted to be.

“Good, see, you are relaxing, no pain, no, nothing at all,” said Deshpande.

Not quite. My body spun in circles. On demand, I curled backwards into a donut, hanging from the noose around my waist. Deshpande folded my hands in a neat namaste.

I didn’t feel so classic.  I left a couple hours later, with a new appreciation for gymnasts, a slew of new yogic poses in my back pocket… and a slight limp.

What a relief the Games are finally over without any of the catastrophic outcomes threatened by the intensely critical media coverage in the week or two preceding the opening ceremony. You had to wonder what that was all about, there was such an air of hysteria in some of the BBC and other international coverage, a kind of sneering ‘Oh my God, look what happens when you allow these irresponsible, disorganized, corrupt and backward natives to undertake an event of this magnitude. It’s going to be a disaster!’ People joked on Twitter that the Commonwealth Games was changing its name to Survivor, New Delhi.

And in case anyone thinks that there was an international plot to derail the Delhi Games the charge was led by members of the Indian media themselves who were unrelentingly snide and critical. As Sidin Vadukut tweeted:

@sidin Remember how local media was supposed to focus on CWG positives and not shame us in front of the world? Yeah, that plan is not working.

Perhaps it was deserved, but the international criticism that ensued snowballed into what sounded almost  like some kind of racist hounding which only ceased when the glorious Opening Ceremony unfolded without a hitch. Barkha Dutt had a good write-up on some of the lessons from the Commonwealth Games:

The CWG looking glass
In the end, MS Gill may well get to have the last laugh. The Commonwealth Games did indeed  come together with the haphazard, but happy inefficiency of a boisterous Punjabi wedding —  right down to the slightly cringe-making filmi jhatkas at the closing ceremony. But much like Mira Nair showed us  that sometimes it takes a monsoon wedding for family fissures, dark secrets and psychological truths to break out into the open, the Games have held up a mirror to India as a country and a people. And here are some reflections that stare right back at us. Crony capitalism has taken the sheen off India’s glossy ‘Liberalisation Dream’. As we watched insidious corruption, big money and bumbling incompetence come together in a horrifying union, do you remember how many times we wanted the State to step in and take over?