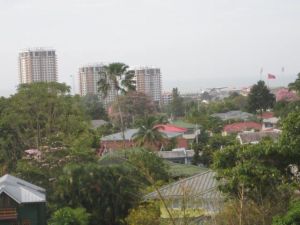 I’ve been in Trinidad the last couple of days where i’m contemplating the giant $2 million national flag fluttering in the breeze in Port-of-Spain, while hummingbirds fight each other for a suck at the red plastic feeder on the balcony of a friend’s apartment. Found out yesterday that Trinidad and Tobago is suffering from a prolonged drought as is the rest of the Eastern Caribbean. Jamaica has also been severely affected by the lack of rainfall recently but the discussions around this never ever referred to the fact that this was a regionwide phenomenon.

I was interviewed practically on arrival for an online forum called NBS or the No Behaviour Show by @SanMan_ish or Hassan, someone i previously knew only on Twitter. Hassan had just started NBS the week before and was wishing he had access to a Jamaican perspective on various issues including water shortages, when my tweet announcing my arrival in TnT appeared in his timeline. Before you knew it i was being interviewed on a variety of subjects starting with something Jamaican Minister of Culture, Olivia Babsy Grange, had said at the opening ceremony of the International Reggae Conference at UWI, Mona. Was Jamaica losing Reggae to European musicians as Ms. Grange had suggested, Hassan wanted to know. I said i preferred to view singers such as Gentleman and Matisyahu as ambassadors for Reggae, taking a Jamaican product to new brand audiences. To hear more of what i said click here…
The International Reggae Conference at the University of the West Indies, Mona, was a big success i thought. The first morning I chaired a panel on Collection, Storage and Dissemination of Jamaican music with three participants, Herbie Miller, the director of the Jamaican Music Museum and two Americans; Elliott Lieb, founder of the Trade Roots archive, dedicated to collecting Jamaican music and Brad Klein, a film-maker working on a documentary on Jamaican ska. In the audience, amongst others, was Stranjah Cole, ska maestro, who features in the film. 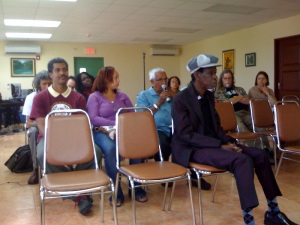 Stranjah Cole seated in front row
Herbie Miller made an eloquent case for a budget to stock his museum and do the kind of work the foreigners were doing gratis out of love for Jamaica’s music. How extraordinary i thought, that a case even needs to be made for something so obviously deserving of support. After all the Jamaican government had decided decades ago that Jamaican art was worthy of being collected, stored and disseminated, investing in a National Gallery for the purpose. And this despite the fact that Jamaican art is insignificant compared to Jamaican music which has virtually put the country on the map, creating Brand Jamaica and maintaining its profile to this day. Yet as Brad Klein pointed out many of the early recordings and films on Jamaican music have vanished without a trace. What a tragedy!

l to r: Chappie St Juste, Herbie Miller, Stranjah Cole, Brad Klein and Elliott Lieb
During the discussion that followed the presentations, cinematographer Chappie St. Juste who was in the audience, disclosed that the films were actually safely stored in vaults in England where they had been sent for processing and the task now was to repatriate them. But repatriate them to what? and where? and to what conditions? The music museum exists only in name. Perhaps instead of berating Europeans for ‘stealing’ our music we should be grateful to them for having stored our cultural products safely, something we ourselves have been careless about. Remember the scandal a few years ago when it was discovered that the Jamaica Broadcasting Corporation archives had been vandalized, and that early recordings of Louise Bennett and others had vanished?