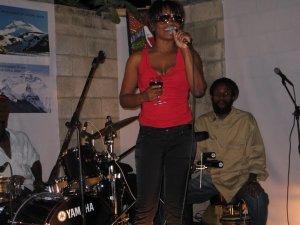 Wow, what a weekend. First there was the debut of Kingston Logic on TVJ’s Entertainment Report, Friday night. The Rickards Bros and friends were all in house to watch it and celebrate.

e fourth day of the West Indies vs. England. Now i hadn’t taken any interest in this cricket match at all thus far but i wasn’t going to turn down the opportunity of a free ticket to Sabina Park to watch the West Indies play–from a box no less. And what a day it was. We reached just in time to watch the third wicket fall and it was all downhill from there for the English. I thought it hilarious when the band at the Mound started playing ‘London Bridge is Falling Down’ and the highpoint for me on an afternoon of pure peaks and summits was Etanna’s visit to our box.
Etanna the strong one, flanked by Bridget Lewis (l) and Diedre Chang (r)

As if that weren’t enough–in the evening i found myself within spitting distance of Tanya Stephens who gave a fabulous, intimate performance at Cold Front, the fund-raising event to get Kim-Marie Spence of CAPRI started on her Antarctic expedition.
Moi, Tanya Stephens and Denise Hunt

Tanya sang for almost an hour, thanking the audience for allowing her to lubricate her performance with red wine. Hey we were the lucky ones, coz the lyrics just kept flowing and the band, Dubtonic Kru, sounded good too. Imagine Tanya performing in your backyard, that was the vibe. Check out my video. I tell you, life in the tropics….
Jumped out of bed early the next morning to take part in the three mile Uni-T walkathon which produced a massive appetite for some good greasy breakfast food which i was able to find at Juici Patties–fry dumpling and callaloo and saltfish. Slept till one pm and then it was time to get ready to go up into the hills to visit a friend. Ignored all deadlines and just focused on socializing this weekend. No regrets. of course now i’m paying for it.

Here’s a video of Tanya performing; quality not great but it gives you a flavour of the evening.

When Derek Walcott launched his insult-laced diatribe in verse against V.S. Naipaul at Calabash 08 you heard of it here first. As another blog noted, “The press was actually scooped on this story by a blogger in Kingston, Jamaica, Annie Paul.” There have been several other occasions when my readers have received advance or inside information about one thing or another from this blog.

For instance many of you would first have come across the latest Waterhouse musical wunderkid, Terry Lynn, right here on Active Voice. My good friend Peter Dean Rickards had been assaulting me at regular intervals with outtakes from his maiden music video, The System, featuring an amazing new female singer called Terry Lynn. I say ‘assaulting’ because PD had decided to use the graphic butchery of a pig to depict the predicament of youth from communities such as Waterhouse which the singer lyrically rhymed with ‘slaughterhouse’.

“I believe in love and life itself. I am not trying to incite or condone violence in anyway. If you see me in a picture with a gun, it’s a satirical picture of the environment in which I grew up. All this is reflected upon us because of a system which I wish not to be a part of. I want to spread a message through my music and believe wisdom and understanding cannot be bought or sold.”

When I mentioned Terry Lynn’s The System back in August last year the music video hadn’t been completed or launched yet. Although its subject matter made me flinch I thought the video brilliant and showed it in Guangzhou at the Guangdong Museum of Art last November where it aroused a lot of interest. Since its release the video has been doing really well, becoming an underground favourite in several places outside Jamaica.

At year end Pitchfork Media — “the most popular independent-focused music publication online” selected THE SYSTEM by the Rickards Bros. as one of the top 40 videos of 2008. Spin Magazine deemed it one of the 20 Best Music Videos of 2008 ranking it at No.12 worldwide and saying “Sometimes really brutal imagery is necessary to express pure rage at unforgivable social injustices. Leave it to Lynn to lyrically elaborate.”

Dan Cairns of the Sunday Times, UK, declared Terry Lynn, one of the 10 hot new music acts for 2009 in his picks of this year’s “next big things” saying, “Terry Lynn Williams’s first album, Kingstonlogic 2.0, is one of the most exciting debuts I’ve heard in ages.With blues-infused folk, some doo-wop soul and electro synth-pop aplenty, there’ll be something for everybody.”

I’ve just previewed Terry Lynn’s new music video, Kingston Logic, by the Rickards Brothers (and others). It will blow the charts and make history. watch out for it! Using laborious animation techniques which stretched the process out way beyond what a normal video would have taken to finish the Rickards Bros have raised the bar of musical production considerably. The extra time and effort spent was well worth it; the video is a multi-faceted Kingston diamond combining crazy lyrics, a compelling electro beat, seriously creative imagery and razorsharp editing. I can’t wait to see where such a superlative, stylish vehicle will transport Lynn.

It’ll be a week before the video is publicly released and I can put it up here. But here’s The System for those with the stomach to watch it.


The middle and upper classes in Jamaica are whipping themselves into a moral frenzy over Daggering–the latest dance craze to sweep Kingston streets– screaming in the best tradition of the former slave-owning classes (Upper St. Andrew logic?) for the authorities to do something, anything, to curb the feverishly creative dancing masses (while themselves preparing for the thrusting gyrations of carnival; Eve Mann has a provocative blogpost about this, Soldering that is what young women want). Meanwhile Terry Lynn has given birth to a brand new paradigm with her debut album KingstonLogic 2.o.

2009 is going to be an exciting new year for Jamaican music! Remember–you heard it here first.