Word on the street has it that the Jamaican Security Forces have created a “Don Squad” which is systematically eliminating “Dons” or Ghetto strongmen around the country. Popular belief is that although the eliminations are staged as shootouts between rival gangs it is the police who are behind the killings. If this is true it would seem to be a clever strategy and might very well give an added resonance to The Last Don, at least in name, by the Rickards Brothers. 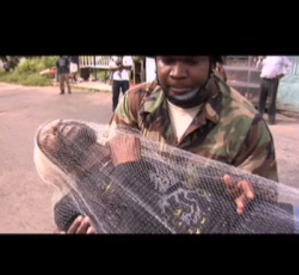 The Last Don was premiered to much acclaim at the recently concluded Kingston on the Edge in its Films on the Edge segment. The pilot for a putative TV series Last Don is an ironic, irreverent look at music promoter Josef Bogdanovich and the contortions he goes through in his attempt to corral and showcase Jamaican musical talent. I took the opportunity to quiz the prime mover behind the film, Peter Dean Rickards, about the process of making this comic documentary and his own history as a film-maker and photographer. Check out the priceless footage of Kingston Signals, the show that started it all, with Sean Paul before he hit the big time.

Q. So what are the origins of Last Don? How did the idea come to you? What are you trying to or interested in portraying?

The Last Don actually originated about 8 years ago when I began working at Downsound Records which was then in the basement of Globe Furniture on Constant Spring road. The boss was a guy named Josef Bogdanovich, an American from Los Angeles who had moved to Kingston a few years earlier to produce Jamaican music and concerts. Although the initial purpose of meeting Josef was to build him a website, I ended up working there for the next three years after we created Kingston Signals – the first live-to-broadband webcast of hardcore Jamaican soundsystems.

It was a great job and I quickly became addicted to the fast pace and unpredictability of the business; but what was far more interesting was the day-to-day hustle of running a music studio in Kingston and the personalities involved, particularly that of Bogdanovich who could be described as ‘constantly in first gear.’

Several years later when I began to think seriously about jumping into film, it occurred to me that the story of Downsound was something I really wanted to do because I had practically written the story in my head a thousand times; constantly explaining ‘episodes’ to people who would ask me what it was like to work in such a crazy environment with a person like Josef, who is often misunderstood by people who either don’t know him or are put off by his management style which goes something like : “Get it done or get the f*** outta here!”

Then, when you stop to consider that there are no guarantees in that line of work, and that each day can end in great success or terrible failure, the potential for a series or even a film becomes more obvious, especially when fused with the character of Bogdanovich himself, an unlikely underdog , a white guy in Kingston working in Jamaican music who does things his way, because, after all — he can.

As far as what we were trying to portray, it is simply a true-to-life observation of some unusual people in an unusual business, with Jamaica, and particularly Kingston as an interesting backdrop.

Q. What is your background in film/video? Is it true that this is your first attempt at film having experimented with music videos previously?

I have no formal training in film or video but just like my photographs I believe it’s all about a solid concept followed by framing and then ‘painting’ the story from the pieces. Although my cousin PJ (the other half of the Rickards Bros.) has been working as a video editor for over 10 years, I’m very new to video/film. After we got our first camera in late 2008, PJ came down from New York and we immediately got to work; creating two videos for Terry Lynn before jumping right into production of The Last Don. Also involved in the team is Jarmilla Jackson (another cousin) who writes, creates and participates in the meticulous editing process with me and PJ. The three of us are highly critical of our own work so hardly anything slips by without heavy scrutiny– but we like it that way.

Q. You’re clearly immersed in visual culture, who are your influences? (Weejee etc) is it true you have no photographic training? how did you learn to do what you do?

Weejee wasn’t much an influence you know. I only discovered him the other day but I can certainly relate to his ambulance chasing from the perspective that he had to sell his stuff. Photography is not an easy business to be in if you want to actually earn a living taking pictures of what interests you (unless you actually like taking wedding photos and talking about ISO settings). In my opinion, you have to have an angle and be doing something different from the other 50 million people who own a camera. I guess that’s why Weegee took pictures of murdered gangsters instead of that rusty boat down by the airport.

No I didn’t have any formal photographic training but let’s be serious here, how could you justify more than a week of ‘photographic training.’ You might as well go to school to learn how to put batteries in the thing and attach a lens. It’s just an instrument that anyone can operate. No school can’t teach you to be creative no matter how many years you study the work of others. Dentists need school, not photographers.

To be sure, I learned to make a decent photograph by simply shooting and looking at what I did, then adjusting to make it better. It can be fun but it also made me a lazy writer and so I’ve been drawn towards video and film because it combines the visuals that I enjoy doing with a return to storytelling.

My biggest influences are Stanley Kubrick, Woody Allen, Tarantino, Coppola (and many others but those stand out). I’m a huge fan of SCTV, The Office (UK) and anything Charles Schulz did.

Q. Ideally what would you like to be doing? What are the obstacles or constraints you face?

For once in a long time, I’m actually doing what I really want to be doing – making stories that can be shown on a big screen in front of many people…and watching as they react to the things they see and hear. It’s an incredible high to experience that, especially since I always dreamed of doing it. The goal is to constantly improve, both technically and creatively so that we can justify bigger budgets that will enable us to do bigger things.

As far as constraints are concerned, I suppose it’s the typical stuff: limited resources and the limited mindset of a rather stagnant television industry here. Considering the creative currency of Jamaicans, it’s sad that one has to look outward, not only for funding but for outlets to present your work without someone like Cordel Green telling you what is suitable for the eyes and ears of the adult population.

Thankfully, we have the Internet and Fed Ex to circumvent certain things.