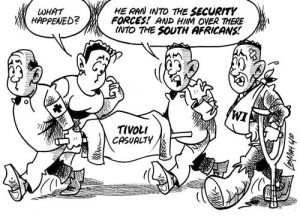 Las May, The Gleaner

On May 8 I had occasion to talk to Tom Tavares-Finson, Chris Dudus Coke’s erstwhile lawyer (who stepped down as part of his defence team on May 18, citing conflict of interest) at a mutual friend’s birthday party. Can you talk about Dudus I asked, unable to resist my reporter’s instincts.

“You mean that figment of the collective imagination?” Tom responded playing his legal role to the hilt; according to him, Dudus was an ordinary man on whom every abnormal event–the revoking of visas, crimes of various kinds, resignations–was being pinned with abandon. I was more than willing to engage in a spirited discussion on this unlikely portrayal of the nation’s Public Enemy No. 1 but, alas, was deterred by frantic hand signals from my host who was afraid that the ensuing argument might derail his party.

I don’t think anyone there could have guessed that within two weeks Tom’s beloved Tivoli would be torn to pieces by Jamaican armed forces searching for Dudus who was barricaded in there. And apart from the one or two nondescript photographs circulating in the media there was hardly any information on this man now hunted on grounds of being a dangerous criminal mastermind by the United States.

This was the same man whose power enabled him some months ago to defuse the simmering rivalry between the Gaza and Gully factions by mounting the West Kingston Jamboree in Tivoli where the rival Dancehall DJs at the head of the two factions, Vybz Kartel and Mavado, performed on stage together (see video above). Dudus is also reputed to do a mean Gully Creeper but unlike our business and social elite he shuns the limelight remaining a shadowy, mysterious figure who by all reports craves ‘ordinariness’ and ‘normalcy’.

Finally this morning, Jamaica’s Sunday Gleaner has shed some more light on this retiring character in an excellent article by Tyrone Reid called “FROM MATH WHIZ TO WANTED.” For once we’re able to read a story like this in the local media and not in the New York Times, on BBC or CNN. The Gleaner reporter tracked down people who knew Coke at Ardenne High School, and uncovered information suggesting that the young Coke was anything but a ganglord in the making. In fact he was one of that rare, endangered species in Jamaica, a natural mathematical talent.

“The math teacher remembered Coke as one of his elite batch, picked at the end of the ninth grade.

Having breezed through CXC math Coke tackled the dreaded additional mathematics (add math) in Grade 11 and scored a Grade B – the second-highest mark.

“Math is the only universal language, and he spoke it very fluently,” the teacher reminisced. “I taught him for five years straight. Basically, he was the model student; very quiet, and there were no problems in terms of discipline,” said the educator.

Reid’s story goes toe to toe against The Sunday Observer‘s rambling reminiscence by journalist Tino Geddes of Tivoli and its various Dons, most of whom he seems to have known closely.

Dudus is not a run of the mill ordinary Joe, looking to make some money and in search of power. He has never been and he will never be regarded by those who have known him, in that light.

I have personally known all the previous ‘dons’ of Tivoli Gardens. I had a special affection for Massop; I was closely involved with Bya; I watched Jah T go through high school at Wolmer’s; I was particularly close to Jim Brown, and although not as close to Dudus as I was to his father, the younger Coke has commanded my respect.

Dudus has undeniably captured the nation’s imagination. At the recently staged Calabash Literary Festival the open mic segment was dominated by references to both Dudus and Tivoli. As news broke that his brother Livity and sister Sandra had both turned themselves in to the Police stories started swirling.

Was it true, enquiring minds on Facebook wanted to know, that Livity Coke was on Twitter and when rumours of his demise were reported he immediately tweeted saying “See mi yah”? The urban legends surrounding the Coke family continue to grow yet there have been no images in the media here of either Sandra or Livity or any further information about them.

The Jamaican media is puzzling in its tendency to conceal rather than reveal the news. Tightlipped and taciturn at the best of times, it took the New York Times to carry an article on the extrajudicial killings by the security forces in Tivoli. With the exception of Lloyd D’Aguilar, my former co-host on Newstalk 93, who took it upon himself to visit Tivoli in the wake of the assault on it, and report on what he found there, no other major news media here has followed up in a serious way on the ‘collateral damage’ caused by the breaching of Tivoli.

In the aftermath of the events of May 24th the BBC had footage of masked gunmen in Tivoli fortifying themselves and the community (see below). A reliable source informs me that this footage was actually shot by a TV Jamaica cameraman who had access to the individuals in question yet TVJ declined to air the exclusive video allowing the BBC an unnecessary scoop. The local television channel’s reticence in airing the footage shot by its own cameraman remains a mystery.

What amazed me about this BBC footage that i watched over and over again in my hotel room in Barbados was that much of the early scenery shown, with police dodging around corners of buildings was right outside the National Gallery of Jamaica. The Gallery’s walls are slightly pockmarked with bullet holes now and the fighting outside was so intense that a security guard was trapped inside the Gallery for 5 days.

“How did he survive? What did he eat?” I gasped when told this by the Executive Director of the Gallery, Veerle Poupeye.

“Well, he had access to the coffee shop. Thank God we stock three different flavours of muffins there,” she replied laughing.

11 thoughts on “Desperately Seeking Dudus 2: The Person behind the Persona”