A response to the film Better Mus’ Come 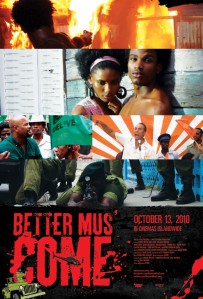 The movie Better Mus’ Come (BMC from now on), which opens to the public in Jamaica on October 13,  is the most exciting development i’ve seen on the local scene for a long time. It signals the end of a long drought in Jamaican film-making and shatters the formula the few movies that have been made here have followed. The film premiered in Kingston on Thursday evening, a great end to an unsettling day when it rained for hours and the earth briefly shuddered. Incredibly on my way out of the Carib car park after the premiere Betta Mus Come by Buju was playing on Irie FM. I couldn’t help wondering if this too had been arranged by the resourceful director of the film, Storm Saulter.

It’s not often that locals get to see themselves on the big screen, especially in a full length feature film with such excellent production values as BMC.  The film is an imaginative depiction of the daily trauma that passes for life in the postcolony, the tough, internecine runnings of people caught between “implacably opposed” political parties (to quote my friend Antonym), and the complete lack of access to basic resources to improve their impoverished lives. This may sound too much like real life, too close to home, too harsh a subject, after all a movie is supposed to transport you to new worlds and new imaginaries…but BMC holds up the imperfect lives we lead for scrutiny without surrendering the lyricism and poetry present even in the meanest streets of Kingston.

BMC is the brainchild of Storm Saulter, who has been instrumental in revitalizing the local cine world with initiatives such as the film festival in Negril where his family are in the hospitality business; he’s also the producer of the New Caribbean Cinema series, an innovative collaborative of filmmakers. Where other film industry folk have balked at going, claiming lack of funding and subsidies from government, Saulter has stormed the ramparts, showing that nothing can stop sheer determination and creativity. As he said in a recent interview “This is not the only country where access to funding is limited. So the “filmmakers” need to stop using that as an excuse and find a way to tell their stories. Once you show potential investors that you know how to make a successful product then they will come. But don’t expect them to risk their money on something before its proven”.

And with BMC Storm has proven that he is a force to be reckoned with. Using an almost entirely local cast and crew (American actor Roger Guenveur Smith is the only foreigner) Saulter recreates the atmosphere of Jamaica in the seventies, the era of the Green Bay Killings, the extrajudicial killing of young men affiliated to the Jamaica Labour Party by the security forces, which remains a reference point in the country today. Dudley Thompson, the security minister of the day and the person Christopher ‘Dudus’ Coke was reputedly nicknamed after, is reported to have argued that ‘no angels died at Green Bay’.

The eerie thing about BMC is its currency. Although supposedly set in the seventies, 25-30 years ago, the film could easily be about life in Kingston’s ghettoes today. And that is the abiding tragedy of postcolonial life, in Jamaica and elsewhere: democracy remains an illusion, a mirage behind which lurk unimaginable regimes of violence. It is this tenuousness of life today, of life thirty years ago that BMC captures so unforgettably. Too many people, Jamaicans included, have bought into the myth that Jamaicans are inherently violent, that there is a culture of violence here. In BMC Saulter tries to show that on the contrary violence is produced by the structured inequalities and dysfunctionality of postcolonial life in  societies such as Jamaica.

Saulter works his grim raw material with with finesse and sensitivity. Some of the finest touches in the film for me were the fleeting shots of animals observing the activities of the humans around them. Sleeping dogs woken by tanks turning the corner, a talkative rooster, a lizard perched lightly on a banana leaf seen through the translucent underside of the leaf and the lyrical scene where Kemala, the female lead, dances in and out of the washing hung out to dry. There are streaks of tenderness running through BMC, a foil to an otherwise unremittingly dark and menacing theme.

Perhaps the most poignant and poetic scene in the film is the one of Ricky swimming underwater, locks billowing around him. There is something powerful and symbolic about this shot of a Rasta cleaving his way through the blue green water of the Caribbean sea. Throughout the film Rastafari is portrayed sympathetically, as a force for change and progress. The teacher in BMC is a Rasta, and at one point Ricky attends a Nyabinghi and is clearly attracted to the faith.

The actor who plays the male lead, Sheldon Shepherd, is a remarkable find. The lead singer of the furiously inventive group NOMADZZ, Shepherd is a natural actor. His portrayal of Ricky, the single Dad trying to bring up a young boy in the inhospitable climate of the ghetto is masterful, senstively rendered and filled with grace. The female lead, Nicole Grey, is equally competent. Both deliver their roles with understated eloquence and lightness.

Incredibly in making this film Saulter had to negotiate the same hostile terrain he portrays in it, getting permission from local dons to shoot in their neighbourhoods. In an interview with Yardedge he described the process with matter-of-fact elan:

Jamaica is somewhat lawless, like the wild west of filmmaking. That is definitely true when it comes to local film production. This can be very liberating as a filmmaker, but also kinda tricky at times. For example, don’t bother getting permits to film at a specific location, cause at the end of the day, the “Big Man” has to give the go ahead. That said, when you reach an understanding with said “Big Man” all of a sudden you are able to move mountains, the entire community is involved, and that is often the only way to have genuine protection. This needs to ultimately change in Jamaica, but until that point we filmmakers have to use it to our advantage, and approach our productions as if we are in the wild west, trying to get the stagecoach across the desert in one piece, without losing any passengers to the marauding cowboys.

With BMC Saulter has truly broken the mould of Jamaican film-making. The sets were designed by artist Khalil Deane, a graduate of the Edna Manley School of Visual Art. BMC’s soundtrack is also outstanding and varied. The film references and deliberately recalls that earlier masterpiece of Jamaican film-making The Harder They Come although it is completely different in aim and strategy. In many ways BMC is the visual counterpart to some of what the best songs from the dancehall have been drawing attention for years. Vybz Kartel’s hit song Life We Living is an eloquent case in point (see below). How can we look the other way anymore? After this film we either make sure that Better Mus’ Come or forever admit the failure of life in this postcolony.