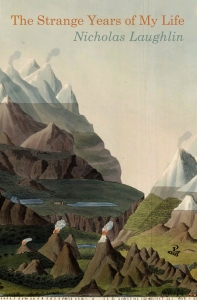 And now for something completely different. This is a guest post by Anu Lakhan, a poet and writer from Trinidad and Tobago. She’s reviewing a volume of poetry by her friend of many years standing, fellow Trinidadian Nicholas Laughlin. Nicholas Laughlin is the editor of the Caribbean Review of Books and the culture and travel magazine Caribbean Beat. He is the program director of the Bocas Lit Fest, Trinidad and Tobago’s annual literary festival, and a co-director of Alice Yard, a nonprofit contemporary art space in Port of Spain.

That was the bare bones bio, it describes some of the things Nicholas does without conveying a sense of the man. To remedy this I borrow a Facebook status update by Jamaican poet Kei Miller which deftly places Laughlin as the multi-tasking, multi-faceted literary dynamo he actually is:

In this life that I live there are often two groups: people who mostly write literature and others who mostly make space for literature – editors, agents, festival organizers. But sometimes there is a crossing – someone who has mostly made space becomes someone who mostly writes. And it can be embarassing that crossover – when the writing is servicable but not amazing. Still, occasionally there is a person who makes the transition brilliantly. Toni Morrison comes to mind. She lived an entire life as an editor, working on other people’s writing – and only began to write when she retired from that. In the Caribbean, we now have Nicholas Laughlin. I’ve spent yesterday and today reading his first collection of poems – ‘The Strange Years of My Life.’ It is astoundingly good. I can only hope that we make a space for this book as large and as generous as the space Nicholas has made for all of us.

A review with as many stops as starts

Start 1
If you find yourself short on wrens, fur, twigs, teeth, bones and maps, fret not: I know where they are. Nicholas Laughlin has appropriated them and found precise and usually very complex homes for them. If a thing be friable, fragile, concealed or rather like a brand new razor blade hidden just where it can do the most damage to something like a heart or a secret, they are in this first collection from the poet.

Stop 1
That is not at all what I mean. That all sounds very much like no matter how hard you try to break into the text everything will be hidden from you. And that’s not true. In their way, these poems are no more complicated than the average person (or poem); no more inscrutable than he (or another poem). Each poem has a personality and so it is easier to think of them as people than as something as still and set as a piece of writing. Everything vibrates.

Start 2
Nicholas Laughlin’s first solo flight with The Strange Years of My Life is a nice bit of work in all the real meanings of the word “nice” except the one with which commonplace conversation has abused us. It is fine, sensitive, fastidious, and if you have something in the way of a good dictionary you can work out the rest. I can think of no poet writing now (a Laughlin poem would want a better sense of the “now” of which I speak) or here (as in the world of poetry available to me; that is to say, that written in English) who has more respect for the form. And if you respect the form, you respect the subject and in doing so, as often as not, you end up respecting the reader. Some pieces are spare and surgical. Some initiate conversations that would be better finished off-page and in the company of friends and a lot of wine.

Stop 2: It is difficult not to enter the spaces filled with French cinema and Borges and mirrors but once you get there it’s a question of what to do. You can simply love them. But you will have to work for it.

Stop 2.1: Did Wilson Harris or Eliot or Zeus ever set so many traps? What is it with gods and writers and all these traps?

Start 3: #alreadynooneremembersyouathome. The first poem is called “Everything Went Wrong”.
Don’t trust the maps; they are fictions.
Don’t trust the guides; they drink.
In this country there’s no such thing as “true north.”
Don’t trust natives. Don’t trust fellow travellers.
Better no one knows you sleep alone.
Already no one remembers you at home.

The last line seems destined to be the most quoted of all the lines in all the pieces. That is a shame. It’s a worthy line but if you allow yourself the false security of such neat endings you will miss equally—or exceeding—flecks of the gorgeous, the alchemical, the blood rush beauty.

Stop 3: “It took longer to read about those months than to live them.” Above all else, this is the thing that must be believed. The more-than-a-decade’s worth of work that is here must certainly have been lived faster than the business of parsing and aggregating their details.

Start 4: Remember, these are poems and therefore allowed to tell such stories without being relegated to the worlds of insanity or juvenilia. Be careful with them—the poems are in ongoing dialogue with each other—you may be tempted to feel left out. Don’t. You’re not. The secrets are ready to be let out.