My Gleaner column of February 8, 2017. Reactions to it ranged from amusing to predictable to baffling.

You are the head of a self-appointed coalition to foster a ‘healthy society’ in Jamaica. You are also a medical doctor. Or you are the head of an assembly of churches, a Reverend. No, not one of those going around molesting young girls. No, no not one of those. You are both dedicated to the policing of gender boundaries in Jamaica. Men are men and women are women and there shall be nothing betwixt or between.

You are duty-bound to police the borders of Jamaica against interlopers and unwanted immigrants. Why, even Donald Trump is taking a leaf out of your book! Those who ignore or show lack of respect for gender boundaries are not welcome in Jamaica. It is your solemn duty to make this clear to every citizen. You have to be particularly vigilant against the Gay Agenda, a global conspiracy involving institutions at the highest levels—the UN, the World Bank, the EU—whose goal is to destroy the world (and inter alia the Jamaican family) by legalizing gay marriage.

If, God forbid, gay marriage is legalized in Jamaica  it will be the beginning of the end. For all and sundry will take up with their own gender, setting up same sex households all over the country, and soon procreation will grind to a halt. There are no examples, as yet, of this happening in countries where gay marriage has been legalized but so what? Reality is not a shackle. Keep stressing the following point. How can we have a healthy society without children?

As for feminists. They too must be kept from invading Jamaica where we like to do things in old, time-honored ways. It is a pity that slavery was officially abolished two centuries ago. What is wrong with slavery? Nothing at all. Slaves are essential to healthy families. Women are meant  to cook, clean, raise children and provide sex for heads of households at no pay. Also the sex part is non-negotiable, women must deliver when the subject is broached. Shop must remain open 24/7. Think Open Access is a new sumpn?

It’s just that slavery must be gender-based. This is why it’s so important to distinguish between the sexes. There can be no ambiguity about this. Men and women who break these rules must be enslaved by our cultural rules. Either they conform to these or they leave. It is for the benefit of the nation. Our good name is at stake.

Also, it is to be noted that rape is a crime that can only be inflicted on women for Jamaican law defines sexual intercourse under the Sexual Offences Act as “penetration of the vagina of one person by the penis of another person”. Rape occurs when there is sexual intercourse without the consent of the woman. That is, for rape to happen, there has to be penetration of a vagina. By a penis.  If a man buggers a boy or man that is not rape; if a man thrusts his penis into your daughter’s mouth without her consent that is not rape either; nor is penetration of one’s orifices, vaginal or not, by the forced intrusion of an object, considered rape. 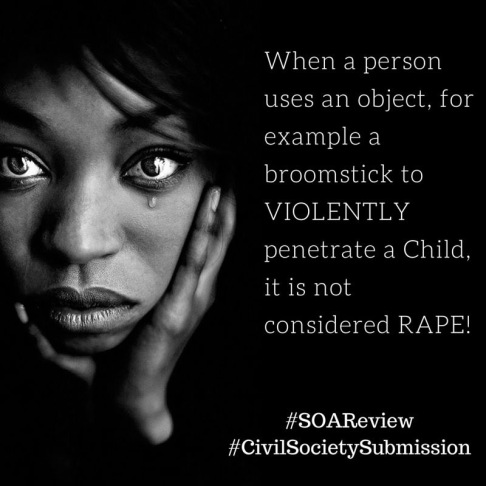 What about all those women who keep turning up murdered, you ask? Like the one in the barrel in St Thomas? Ignore them man. More than likely they were asking for it. Its just the work of feminists. That is why we have to oust them too. There is too much sensationalizing of crimes against women, the media gives them too much space. “Men die everyday . Boys are molested and sexually assaulted in every community. But what? No one cries out, protests, chastises government or prays about it. Male lives matter too.”

4 thoughts on “How to thwart the Gay agenda”