Colin Channer’s letter of resignation to the Board of Calabash Literary Festival (which he was Chairman of) explaining the reasons for his resignation. 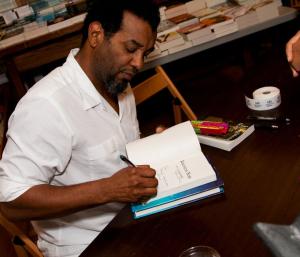 People are always asking me for details about Calabash, the annual literary festival at Treasure Beach, Jamaica, and why suddenly at the peak of its popularity it seemed to stutter. After 10 glorious years there was suddenly no festival in 2011 and then in 2012 there was a reprise which i missed. It was obvious to me from the beginning that the problem was that Channer, the founder and artistic director of Calabash, wanted out and was no longer part of the core crew. Media reports claimed that funding problems were responsible for the decision to halt Calabash in 2011 but that wasn’t the primary cause. Finally Channer has broken his silence and explained why he decided to resign as he did. The Gleaner carried excerpts from his letter to the board yesterday but here is the full, unexpurgated version, courtesy Channer.

There may of course be a back story to all this. But even at face value its a move that ought to set a precedent in how to love something and yet be able to move on and allow others to continue what you started. This is something sorely lacking in Jamaica where I’ve just witnessed the most bloody handover of a public institution by its custodian of 35 plus years who having reached retirement age still wasn’t willing to call it quits and allow younger heads a chance to show what they could do. This is detrimental to our institutions, and no matter how brilliant, motivated and exceptional the principal concerned they would do well to take a leaf out of Colin Channer’s book and shuffle off when their time comes if not before their time as Channer has done. The world can and will run without you. Get over yourselves.

Just for the record I was at the first Calabash where the butterflies came out in their numbers–you see them all over Kingston when the Lignum Vitae is in bloom too…It was a magical, intimate Calabash that grew and grew and grew, pollinated by the butterflies as it were…Below is Channer’s letter to the board. Enjoy!

Good people (and bad asses), here is the full text of my recent hello letter to Calabash. A few lines were excerpted in the press today.

Dear Members of the Board:

In preparing to write this letter, I looked through the diary I kept casually in the early years of the festival, and found a note dated Thursday, May 24, 2001. It read: “In your opening remarks mention Nie.” Why did I make that note? And what did it even mean?

In trying to answer these questions I re-read every page of the small red book. What struck me most of all (in addition to the barbed-wire wildness of my urban scrawl), was that I’d made no mention of the 500 pink and yellow butterflies that had descended on Jakes, the festival venue, in that first year.

Do you remember their arrival? They came in the early afternoon on Friday, May 25th, and played with us for the next three days. When the festival was over they were gone.

I don’t know where they came from, or where they went. But I do know why I felt no need to record their presence in ink. In those early days of our journey, believing in the future of an international literary festival rooted in a rural part of a rural parish on the wrong coast of a country not known for order or an extroverted love of books, was as logical as going to an airport with a passport issued by the prince of an imaginary world.

When Calabash began in 2001, we operated alone in a world of our own making. Today, there are festivals in nearly a dozen neighboring countries, including Trinidad, Antigua, Barbados, Dominica and Montserrat. In addition, there are several new ones here at home.

I am happy that we’ve instigated these historic evolutions, that we’ve become a model of change. At the same time, I’m fully aware that we remain the most welcoming, the most inspirational, the most daring, and the most diverse festival of all.

None of these festivals have come close to matching our success. And this is not a boast. It is a simple truth, a truth as simple as the one on which we were built. Calabash was built as a communal space for people to publicly celebrate their private passions and love affairs with books. We have always made it clear through all our actions—including complimentary admission to all events—that we didn’t build this organization for some people, but for all people. And this difference cannot be overemphasized in a country where too many of the most glaring patterns of an unjust history are still in place, constraining and controlling hundreds of thousands of lives.

As the organization’s Founder, Artistic Director and Board Chairman from its inception until now, I’ve experienced our many successes from close range. In addition to the annual gathering of writers to read before thousands in Treasure Beach each year at the end of May, I’ve experienced what it takes to publish two major anthologies, six chapbooks of poetry, and to return three important classics of Caribbean literature to a life in print.

I’ve also experienced the thrill of establishing a writers workshop that has intensified the talent of over 125 writers, including Marlon James, winner of the 2010 Dayton Peace Prize in Literature, and Ishion Hutchinson, winner of the 2011 PEN/Joyce Osterweil Award.

However, my biggest thrill is of kind few leaders are ever fortunate enough to have: the clarity of conscience that comes with ending active tenure with the ledger in the black.

As you know, I brought my active tenure to a close at the end of 2010. Since then two years have gone by. It is now time for me to end my tenure completely and appreciate your efforts from afar. This letter serves as my resignation from the Calabash International Literary Festival Trust and all its related organizations, in all capacities, with immediate effect.

If you should ask me to express my feelings in a single word, it would be joy. The ultimate goal of leadership must never be its own survival, but to become obsolete. I am glad this time has come.

If you should ask me how I’d like to be remembered, I’d be torn between the many silly names you’ve given me to highlight my obsession with getting every detail right. John called me Master and Commander. Justine called me Festival Dictator. To Kwame I was The Architect.

The “Nie” in that diary entry many years ago is almost certainly a reference to Oscar Niemeyer, who designed many of the most important buildings in Brazil. I must have planned to use a quote from him in my first-ever opening remarks. I am not sure which quote I would have chosen, but now in this time, this quotation just feels right: “… from my perspective, the ultimate task of the architect is to dream. Otherwise nothing happens.”

This is not goodbye from me, dear friends. In truth, it is hello. With the passing of two years I can now greet you with the open gaze of an enchanted stranger. In time we’ll get to know each other once again.

I leave you now with something that the world needs more than even love, and that is gratitude. Thanks for 4,380 days of selfless giving.