We slavishly practice the letter of the law and studiously ignore its spirit, especially if financial blandishments are on offer. As a friend observed on Facebook recently, “I love how TVJ follows an ad for Black Stallion “Bedroom Tonic” with a public service announcement about how the program is rated PG. At 8:50 on a Sunday morning #dobetter”. 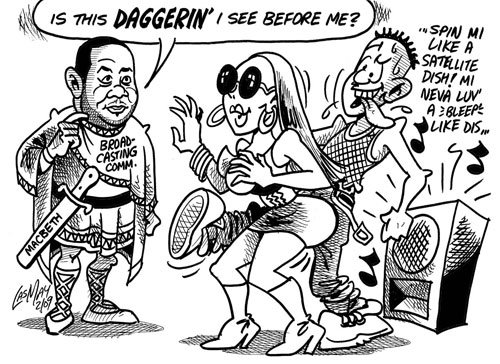 Below is the unedited version of my Gleaner column of Aug. 10, 2016. It seems ever more relevant today now that news has broken that five senior members in Jamaica’s Opposition People’s National Party (PNP) have been fingered in a campaign funds misappropriation scandal. At the same time the police are belatedly continuing an  investigation into the alleged involvement of a senior Jamaican politician from the ruling party in a murder plot years after evidence was provided of wrongdoing.  Meanwhile the Police continues to harrass and arrest citizens for using profane language. The concept of obscenity takes on new meanings in such a context. See my column below:

It’s high time the law against using ‘indecent language’ in public is taken off the books. In a society which acknowledges widespread abuse of power by the Police, the state must remove any unnecessary pretext  lawmen might have for arresting citizens, especially when the so-called crime is absolutely no threat to public order. People should have the right to curse when they are upset, and if Police are breaking the law by cursing at them for no rhyme or reason, yes, citizens should have the right to curse back without being manhandled on the pretext of being arrested.

Had this inane law not been on the books Kay-Ann Lamont and her child would be alive today, the latter all of 4 years old. Her two older children would not have to be passed around from relative to relative like hot potatoes as was reported in the news a few days ago. According to a  newspaper account:

“The summer holiday is a bittersweet period for sisters Gillian Senior, 13, and nine year-old Sabreka Salmon, daughters of Kay-Ann Lamont…For the first time since last Christmas, the sisters played together two Thursdays ago, having become accustomed to a choppy routine after being separated to live with relatives following their mother’s death.”

Lamont’s crime? A policeman overheard her using an expletive after her wallet was stolen on Orange Street where she was shopping for back to school items for her children. In the tussle that followed his decision to arrest her he ended up shooting the 8-months pregnant woman in her head, killing both mother and child instantly. If that isn’t obscene, i’d like to know what is.

Meanwhile criminal charges have been pressed against the Gordon Town woman who greeted profanity from a policeman with profanity but “NO CHARGE FI DI POLICE WHEY DID A BATTA UP DI WOMAN FI NOTHING”. This despite the fact that the policeman involved was caught on video dragging the woman by her hair and generally manhandling her with the kind of gusto and  abandon one has become used to seeing from American police, prompting a #Blacklivesmatter movement in that country.

As an online commenter once said “the culture we have developed seems to be one where there is much law yet no order”. Yet we refuse to reconfigure the legal system inherited from our colonizers, keeping alive archaic laws that have long been consigned to oblivion in the countries where they were first devised. We slavishly practice the letter of the law and studiously ignore its spirit, especially if financial blandishments are on offer. As a friend observed on Facebook recently, “I love how TVJ follows an ad for Black Stallion “Bedroom Tonic” with a public service announcement about how the program is rated PG. At 8:50 on a Sunday morning  #dobetter”.

This is the same spirit in which the government pays lip service to the Paris Agreement it signed some years ago to stick to a Nationally Determined Contribution to greenhouse gas emissions. According to Wikipedia, Intended Nationally Determined Contributions (INDCs) is a term used under the United Nations Framework Convention on Climate Change (UNFCCC) for reductions in greenhouse gas emissions that all countries that signed the UNFCCC were asked to publish in the lead up to the 2015 United Nations Climate Change Conference held in Paris, France in December 2015. Jamaica did so in November 2015.

Along comes an investor with deep pockets, promising thousands of jobs, and the government is willing to abandon the Paris Agreement and sign on to a 1000MW coal-fired plant to be built by a Chinese company, Jiuquan Iron and Steel (JISCO). As Diana McCaulay, head of Jamaica Environment Trust (JET), often a lone voice in the wilderness, points out:

“A modern coal-fired plant emits 762 kilograms of CO2 per megawatt-hour of electricity generated, if there is no CO2 capture. This plant alone would emit roughly 6.7 million tons of CO2 per year, just over half of our 2025 target. Meeting our Intended Nationally Determined Contribution to greenhouse gas emissions under the Paris Agreement would become highly unlikely.”

A multitude of sins creep in under cover of blandishments of ‘development’ and ‘progress’. For the government ‘job creation’ translates to votes which must constantly be mustered no matter the cost. What could be more indecent than that? In an eloquent article published by Commonwealth Writers called ‘Giving up on the earth’ McCaulay details the price we are paying globally for reckless abuse of the environment in the name of progress:

“As I write, the world faces 14 straight months of global record breaking warm temperatures, described on many websites in the dispassionate language of science. Disease vectors like mosquitoes are spreading outside their previous latitudes and so are the diseases they carry. Wildfires rage earlier and longer. Land cracks in droughts and is washed away in floods. The largest living structure in the world, the Great Barrier Reef in Australia had its most serious bleaching event ever – roughly 22% of this wonder of the world is dead. All over the world, the people most vulnerable to extreme climate events are displaced, impoverished and die. You think there is a refugee crisis now? Wait until large areas of the globe are uninhabitable. And yet real reductions in greenhouse gases have not been achieved, despite decades of international meetings, agreements and stated good intentions.”

Its high time we paid attention to the spirit of the law and agreements we sign on to, instead of obeying them in letter only. And take that #$%^@ law against indecent language off the books! There is much to curse about. 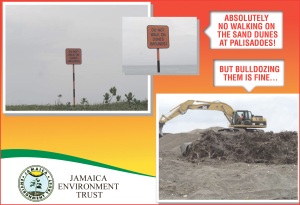 I find myself torn between Diana McCaulay, who heads the Jamaica Environmental Trust (JET) and Greg Christie, Contractor-General of Jamaica as candidates for my Man of the Year award.

After the devastating rains we’ve had recently and yesterday’s minor earthquake (could this be the minor before the major as @Marxshields asked on Twitter) we should be even more conscious of the environment we live in and how fragile it really is. Yet how many of us are willing to be activists in ensuring that Jamaica’s delicate ecosystem isn’t eviscerated by ambitious ‘development’ plans with little consideration for preserving the country’s coastal integrity?

An environmental victory is in some ways an absence – a road not built, a mine averted, a hotel relocated, a golf course avoided. We are used to the presence of a natural resource – while it persists, it’s unremarkable. An environmental victory is always temporary – no matter how solid the case, how overwhelming the public support – at some point in the future, an attempt will be made to reverse it. The plans for the mine will be dusted off, there will be a new investor for the hotel that wasn’t built and a case will be made for the golf course.

On the doorstep to the city of Kingston in September 2010, you can see an environmental defeat. The Palisadoes spit, that jointed arm that holds Kingston Harbour in loose embrace, has been bulldozed by the National Works Agency (NWA), via their Chinese contractors and/or Jamaican sub contractors, led by the Minister of Transport and Works, with the willing and enthusiastic support of the National and Environment and Planning Agency (NEPA). At this point, it appears that the entire spit will be denuded of all vegetation, its beaches compacted, sand dunes destroyed, the few struggling strands of mangroves obliterated in order to construct or expand (it’s not entirely clear which) an utterly unnecessary road.

It seems that NEPA whose role is to safeguard the interests of the country in matters involving large scale developments which impact on the environment is often toothless when it comes to laying down the law. At a public meeting called on Oct 4 with one day’s notice to stakeholders such as JET, McCaulay delivered a small coffin with the assets of Palisadoes inside it and an RIP sign to Peter Knight, head of NEPA. It was an expression of her frustration with what now seems to be a done deal–the razing of the Palisadoes strip to accommodate a major highway to the airport.

There are plans to also create a boardwalk along the new roadway, which would really be a lovely thing. I visited Barbados in 2009 and enjoyed the beautiful wooden boardwalk the government there had put up along one of the most popular coastal strips there. Why couldn’t we have one like that i remember thinking, so i’m not at all averse to the idea. It’s just that the concerns being raised by the environmentalists here seem not to be gaining any traction and if the price tag is too high, in ecological terms, might we not be exposing ourselves to more violent storm surges and coastal erosion in the future?

It takes balls for a single woman to go up against the state in the way Diana McCaulay has which is why she’s my candidate for Man of the Year.  Below is a video she created to document the proposed changes to the spit, a link to a JET statement about the proposed highway and below that is a link of a University of the West Indies study of the Palisadoes spit done in 1994.