Kingston on the Edge (KOTE), an urban art festival held every June, will not celebrate its tenth anniversary this year due mainly to dwindling support from corporate Jamaica. The email press release from the organizers of the festival said simply:
“The staging of KOTE is a large undertaking and can be difficult given that it is a 10 day studio and performing art festival held at over 26 venues throughout Kingston with hundreds of artists participating.”

“This year KOTE Milestones would have been our 10th anniversary however unfortunately given a combination of factors and unforeseen circumstances including not least of all the financial strain of the festival, we have been forced to cancel KOTE 2017.”

The cancelling of KOTE is a blow to Kingston’s cultural calendar as it was a showcase for artists, writers, musicians, poets, dancers and others involved in the expressive arts. Typically KOTE events catered to aficionados of alternative music (alternative to Reggae and Dancehall that is), modern dance, poetry, theatre, architecture, pottery and visual art, bringing a wide range of patrons, young and old, out of their closets for this rich cultural immersion.

For example at KOTE 2015, David Marchand, the fantastically eccentric and reclusive visual artist found dead in his Runaway Bay home last week, had his first solo exhibition in 23 years featuring 55 of his art works. Titled “Tsunami Scarecrow: A David Marchand Retrospective” the launch of the exhibition featured opening words by Maxine Walters, a dedicated patron of his work, jazz compositions by Seretse Small and a preview of a documentary on Marchand by Chloe Walters Wallace. Marchand liked to think of himself as “a visual Bob Marley”, but I think Lee ‘Scratch’ Perry offers a better comparison.

Another year the highlight of KOTE was a guided bus trip starting at Wolmer’s Boys’ School, the site of the 1891 World Fair and stopping at different locations in Kingston that once were tourist sites. Conducted by architect Evon Williams, the tour extended from the site of the now defunct Myrtle Bank Hotel downtown to Immaculate Conception Convent in uptown Kingston once better known as the Constant Spring Hotel. To visit its beautiful lobby and environs is to take a step back in time, for the nuns have changed the buildings very little and done a good job of maintaining its serene ambiance.

KOTE also pioneered what has become a regular feature of the National Gallery of Jamaica, its Last Sundays programme, when the Gallery is open to the public for free with performative offerings in addition to the art exhibtions. Hard to believe that sponsors were not forthcoming for such a beautifully curated series of events showcasing Kingston as the creative hub it is.

Trinidad and Tobago, on the other hand, even with a depressed economy due to plummeting oil prices was able to find the resources to continue hosting their excellent little literary showcase, the NGC Bocas Lit Fest. Aside from their title sponsor, the Trinidad and Tobago Gas Company, Bocas has 30 or more other sponsors including One Caribbean Media willing to support and celebrate Caribbean talent.

Jamaica dominated the festival this year, leading people to refer to it as the Jamaican Bocas, which culminated in Kei Miller winning the overall Bocas Award for his consummate novel, Augustown. Also in the running was another Jamaican, Safiya Sinclair, for her book of poetry, Cannibal. Safiya was the Bocas winner for poetry this year and is the latest wunderkid of Jamaican poetry to hit the international circuits, winning several mainstream fellowships and awards.

Another headliner at Bocas Lit Fest this year was Ishion Hutchinson, the Portland prodigy, the shearing of whose locks as a schoolboy inspired Kei Miller’s novel, Augustown. Hutchinson’s many honors include the American National Book Critics Circle Award for Poetry, a Whiting Writers Award and the Larry Levis Prize from the Academy of American Poets; he is also a finalist for the L.A. Times Book Prize in poetry. Like Sinclair, Ishion grew up in a Rasta household, she in Montego Bay and he in Port Antonio.

Festivals such as KOTE and Bocas are also about developing a ground for home-grown talent to thrive in…for how much longer can we expect our best and brightest to live in their heads? Safiya Sinclair pinpoints the sense of ‘unbelonging’ quite eloquently:

“Home was not my island, which never belonged to us Jamaicans, though it’s all we’ve known, and home was not my family’s house, which we’ve always rented, all of us acutely aware of the fact that we were living in borrowed space, that we could never truly be ourselves there. Home was not the body. Never the body—grown too tall and gangly too quickly, grown toward womanhood too late. Like a city built for myself, home was a place I carved out in my head, where the words were always the right words, where I could speak in English or patois, could formulate a song or a self. Home for me has always been poetry.”

What makes Usain Bolt tick? How does Jamaican culture produce such an abundance of athletic superheroes? A selection of images, videos and texts about the unbeatable Bolt and his compatriots…including the up and coming Warren Weir.

Just thought I’d post some of the interesting photos, articles and videos that I’ve collected off Twitter and Facebook about Usain Bolt and a few other Jamaican athletes. They give a better insight into Jamaica’s extraordinary athletes than you get from mass media. I think my favourite photo is the one of him with his coach, Glen Mills. You can clearly see the affection between them from the way Usain and Mills are talking to one another. Mills truly is a star in his own right; after all he’s responsible for training the two fastest men in the world today, Bolt and Yohan Blake, who won gold and silver in the Olympic 100m a couple of days ago. Would love to interview him but he dislikes media I understand.

Before that fateful race there were enough skeptics including Tim Layden who went on to write one of the best post-100m articles on Usain in Sports Illustrated. The quote below from a Slate article chronicles the widespread uncertainty about Bolt’s ability to prevail:

A couple of hours before today’s men’s 100-meter final, Sports Illustrated’s Tim Layden made a bold prediction on Twitter: “OK. Go big or go home. My 100m pick: 1) Gatlin 2) Bolt 3) Blake.” Layden wasn’t the only one who was betting against Usain Bolt. The Jamaican sprinter hadn’t run against a 100-meter field this stacked since 2009, when he set the world record of 9.58 seconds in Berlin. In 2011, a false start knocked him out of the world championships. At the Jamaican Olympic Trials earlier this year, he lost to Yohan Blake in both the 100 and 200 meters.

After the race Layden sang a different tune:

LONDON — In many ways, this one was better. Four years ago in China, Usain Bolt transformed the 100 meters into performance art, and the Olympics into a soliloquy, winning with such playful arrogance that it seemed less like a competition than a palette on which an emerging and transcendent talent could splash his greatness in great, broad strokes. The other sprinters were like extras in the Bolt Show, useful in the same way that painted planks of background scenery are deployed in a Broadway production. Bolt was bigger than all of them and so much faster. It wasn’t a race, it was an exhibition (and one that Bolt would repeat four days later in the 200 meters and again in the 4×100-meter relay; three gold medals and an unprecedented three world records. He did likewise a year later at the 2009 world championships in Berlin).

The world gathered again to witness Bolt on Sunday night in London’s Olympic Stadium. Many had surely not seen him since Beijing, as track and field lives on the distant margins of mainstream sport and Bolt is its only true star. In a superficial sense, he did not leave them wanting, winning the 100-meter gold medal in 9.63 seconds, an Olympic record and the second-fastest time in history (behind only his world record of 9.58 from Berlin) and .06 faster than he ran in Beijing. But this was not a virtuoso encore, this was a race, and it had begun more than two years earlier.

Meanwhile on Foxsport.com Greg Couch lamented USA Track and Field’s lack of get up and go while ruefully noting Bolt’s casual, cool but deadly sporting style:

Usain Bolt posed again with Bolt Arms pointing to the sky, then put his hands behind his ears to get the crowd to yell for him more, as if they could. And then he sprinted his 200-meter heat Tuesday to an easy victory.

Well, actually, he sprinted about 125 of it, then jogged the other 75 to advance to Wednesday’s semifinals.

This was basically a day off for Bolt, with a quick Olympic run mixed in. But there’s no day off in the Bolt buzz.

Let’s see: He tweeted back and forth with a Manchester United player, saying he wants to try out for the team. He snuck past one of the picky Olympic rules he complained about the other night, hiding a jump rope in the bottom of his bag. After saying he wasn’t going to celebrate winning the 100 because he needed sleep, he emerged in a picture with three female Swedish handball players, supposedly partying with him in his room at 3 a.m.

This isn’t to be critical of Bolt for any of that, by the way. As an American, I’m asking this:

Why can’t we have one of those? By “those’’ I mean Bolt. I wonder if the US is ever going to get Bolt, understand him, build from him. Meanwhile, it was just a few months ago that U.S. hurdler Lashinda Demus referred to track as “a dying sport.’’ It was just Sunday night that two million people wanting tickets to Bolt’s 100-meter race were turned away.

Well Greg, as i said in an earlier post, to ‘get’ Bolt, you have to get Jamaica. Getting Bolt to tour the USA is one way to approach it but understanding something about the ‘never say die’ nature of Jamaican culture would help too. The videos below might help illuminate this a bit. First a beautifully produced Gleaner video of Jamaicans watching, then celebrating Jamaican victory in the men’s 100m in one of Kingston’s busiest streets:

Then a longer video movie of Usain Bolt, his life and style:

And finally there’s the third Jamaican… 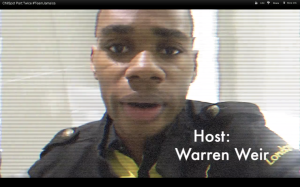 Come tomorrow the world might want to know a little more about Warren Weir, the third Jamaican in the 200m at Olympics 2012. Incredibly Weir too is coached by Glenn Mills. As I write all three have cruised into the 200 m finals. The following video is a good introduction not only to Weir but also virtually the entire Jamaican team, Usain and all, getting ready for the Opening Ceremony…didn’t spot Yohan Blake…but a great peek behind the scenes at the Jamaican camp at Olympic Village. Check it out and #TeamUSA, take notes…

PS: If the copyright holders of any of the photos above identify themselves I will immediately credit them where necessary.