A look at the protest march held in Haiti on February 18 against Jamaican treatment of their Under-17 football team and responses in Jamaica to the Haitian outrage.

The photos below are from the protest march held in Haiti on February 18 against Jamaican treatment of their Under-17 football team. 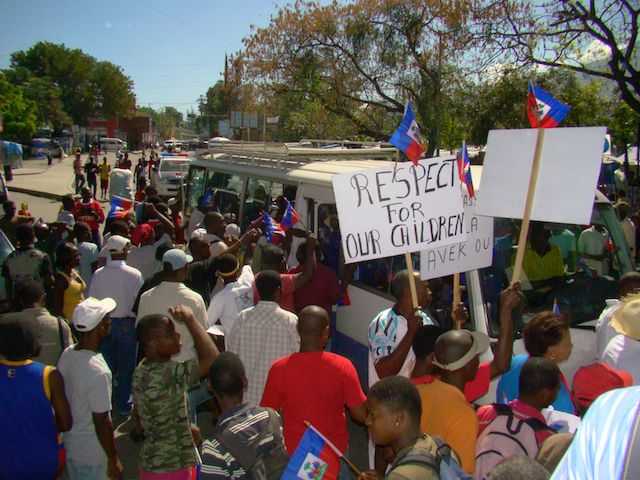 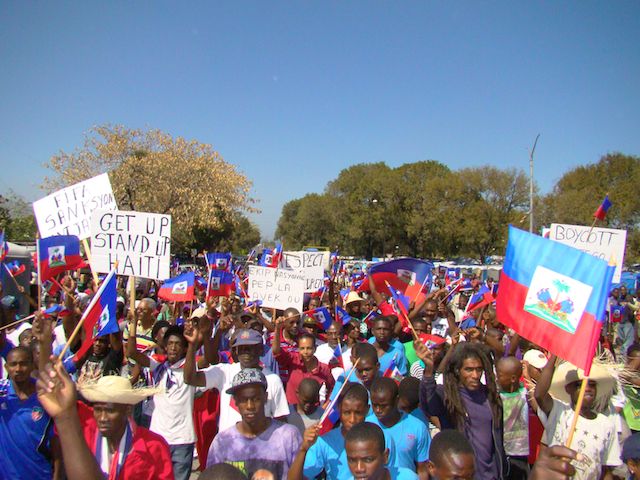 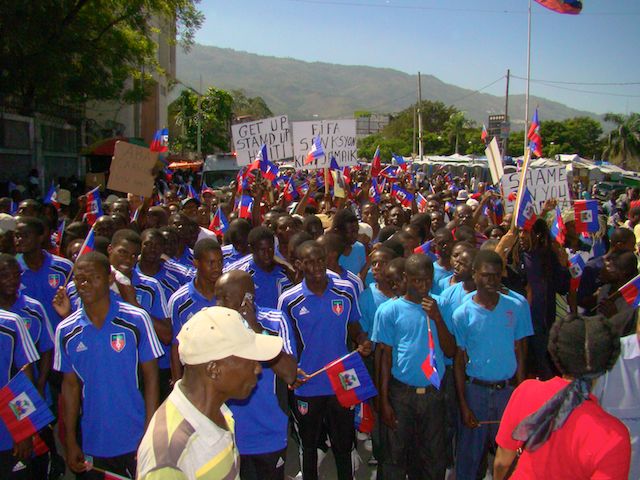 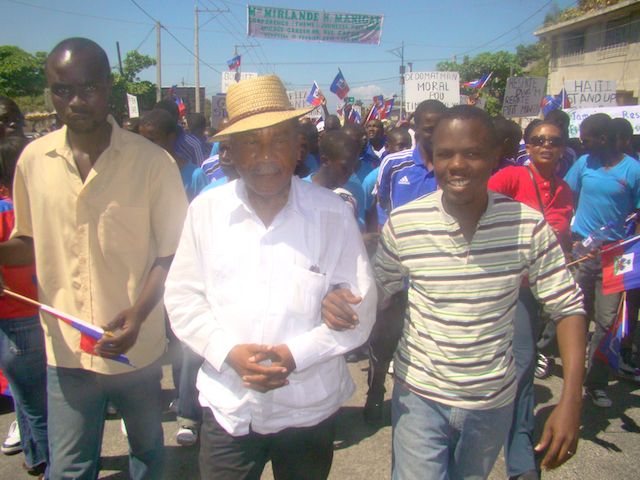 Poor John Maxwell must be turning in his grave. Jamaican officials, showing uncommon concern for the nation’s health saw it fit to send back the Haitian Under-17 football team which had come here to participate in the CONCACAF tournament.

According to an Observer source, fears about a potential cholera outbreak escalated after several of the Haitian players, who arrived in Jamaica earlier this month to compete in the tournament, fell ill. Others had symptoms including fever and headaches. Eight of the players were tested and three were found to have malaria. They were slated to be admitted at the Cornwall Regional Hospital, but there were no beds there, the source said.

As a precautionary measure, the team was to be quarantined. But after a day of waiting inside the hospital’s emergency ward, the Haitian coach got angry, left the hospital, and returned to the hotel at which the team was staying, the Observer was told. He was later allegedly handcuffed and forcefully removed from the hotel by representatives from the Ministry of Health, who had quarantined the sick players at the Falmouth hospital between Tuesday night and Wednesday morning last week.

Read more: http://www.jamaicaobserver.com/news/Haitian-anger#ixzz1EdGyv7zt
The situation wasn’t helped by language problems and the different responses to malaria in each country. It’s a fact that in Jamaica anyone with malaria is immediately quarantined and in general the health authorities are quite punctilious about keeping the nation free from contagion of various sorts. I remember being astonished once years ago when i had just returned from India to receive a visit from a health official who came to my home to ensure that i wasn’t suffering from any illness i might have brought back with me. I did feel slightly insulted but then decided to look on it as a good thing–one small corner of the governance structure that actually works.
Even so i feel that the Jamaican reaction erred on the side of insensitivity. I was alerted to this situation three days ago when an irate friend in Haiti contacted me. At the time there was hardly anything in the media about it and I myself wasn’t fully pripsed on the situation. I asked him if the events were recieving a lot of attention in Haiti. “Attention? We are very pissed off,” came the annoyed reply.
So i went on Facebook and Twitter to find out what others felt about this and was quite horrified at the overwhelming tendency to simply dismiss the whole affair with a smug “Better safe than sorry” response. According to one tweeter “if it were anywhere else. Like China they would b sent home too. This is not a precedence. Been done b4. Remember swine flu!”
Except that malaria, unlike swine flu, isn’t a contagious disease and China does a lot of things that a democratic country like Jamaica might want to think twice before doing. And of course when Jamaicans are ejected from Cayman, Barbados or the UK for fear of their culture ‘infecting’ local youth, i don’t want to hear any weeping and wailing and gnashing of teeth. Those countries are also thinking “Better safe than sorry!”

Other tweets from the diaspora were more critical of Jamaica:


@public_archive I seriously doubt the Jamaican government would quarantine the Canadians with STDs running around Negril. Yeah, I said it. #haiti


@djaspora: #Jamaica should know/do better. Quarantine Haitian kids cause of suspected malaria? Is it malaria or blackness that is contagious? #Haiti

Incidentally the Haitian team coach is Brazilian. I heard him on RJR a little while ago describing the extremely long waits at the hospital and a clinic, we’re talking about hours, five or six hours, without treatment or explanation.He himself was one of the three sick members of the team and returned to Haiti with a very high fever and profoundly upset.
I would have thought that even if Jamaicans feel that they’re in the right they’d have shown more interest in trying to find out what had caused the Haitians so much offence instead of simply shrugging and saying “Better safe than sorry.” The Haitians are clearly hurt and humiliated. They may be overreacting too, just as the health officials seem to have done. I was surprised at how little attention the Jamaican media paid to this situation over the weekend. It wasn’t until the Haitians really made a big issue out of it that the media, today, started focusing on it.
It’s an extremely vexed situation. Jamaica has the upper hand. Does it cost so much to apologize and try to mend fences?