A Jamaican Minister inexplicably asks for a police oversight body to be shut down. what does this mean?? 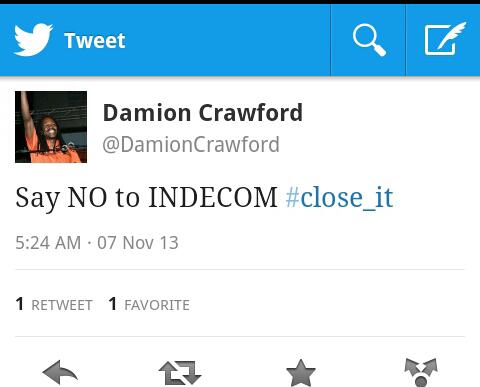 What a disappointment Member of Parliament and Minister of State for Entertainment & Tourism, Damion Crawford, is turning out to be. Check out his tweet, pictured above, about closing down INDECOM, before its had a real chance to show what it can do. Why such  unseemly haste Mr. Crawford? Why aid and abet police men and women who may be abusing their powers, by shutting down the one agency empowered to investigate police killings and other crimes?

Earlier this year, on May 23 to be precise (the third anniversary of the Tivoli Massacre), a group of us decided to make extra-judicial killings by the police and security forces  the subject of Jamaica’s first  Blogging Day. We did this because the police seemed out of control, there is no accountability for such killings, and no police personnel are ever held responsible, emboldening the police to kill more wantonly, more frequently, more brazenly.

The only ray of hope recently has been the creation 3 years ago of a unit called INDECOM, an independent commission to investigate cases of police abuse, and prosecute officers guilty of corruption and murder. Although their success rate has been less than stellar there has been so much pushback recently from within the police, now escalating all the way to the level of a state minister that it makes you wonder if they may not be on the verge of making an example of some bad cops.

In fact I’m beginning to wonder in the wake of MP Crawford’s astonishing tweet whether what my Labourite friend has been telling me for years isn’t true. He claims that police killings go up astronomically once the PNP are in power, because the police feel licensed to terrorize the population under the guise of hard policing. If this is true then its up to us the citizenry to muzzle those who represent us in Parliament, to let them know in no uncertain terms that we will NOT put up with the casual murder of so many citizens by those the state has hired to protect us.

Some months ago Baroness O’Loan, a former police ombudsman of Northern Ireland spoke in Montego Bay during an Independent Commission of Investigations (INDECOM) Open Day held at the Old Hospital Park. Her speech was reported in the Jamaica Observer and is well worth noting:

“There is an unparalleled level of police shootings in Jamaica,” she said, citing figures in a 2002 paper presented by the local human rights group Jamaican for Justice, which showed that “police killings of civilians were running at around 150 a year.”

“In the 10 years since then that number has almost doubled. In 2011 there were about 210 shootings, in 2012, 219 police fatal shootings and between January and June this year there were 147 fatal shootings by police,” lamented Baroness O’Loan.

Baroness O’Loan said she has worked across the world, even in places like Liberia and in Timor Leste when there was an attempt to assassinate the president, yet she has not seen police fatal shootings in the numbers as she has seen them here.

She underscored the need for a thrust by INDECOM, to not only identify the cops involved in shootings, but also their commanders.

“They will need to see the intelligence or information which the police had before and after the shootings. My experience was that once the police concentrated on proper planning of operations; once they risk-assessed each planned operation and send police officers out — briefed to use minimum force to carry out the arrests or searches — the level of police violence dropped dramatically,” Baroness O’Loan argued.

She noted also that proper proactive police management, modern intelligence-led policing, human rights compliant policing — rather than just sending squads of heavily armed police officers out to do a job — can save lives, and make people more trusting of the police.

“When that happens people support the police more and are prepared to come forward as witnesses, and then the police can do their job better,” she said.

Among other measures she recommended was for Government to increase the staff at INDECOM.

“INDECOM needs more resources. They don’t have enough investigators to do this work. They have only 37. I had 91 in a country with fewer fatal police shootings and a smaller geographical territory and I did not have enough,” Baroness O’Loan argued, adding that civilians and members of the JCF should also report police officers involved in wrongdoing.