Deadlines…what would I do without them? They hem my life into productive segments and I feel slightly lost when I’ve just slain a big one. Like now. I was asked to review The Stuart Hall Project, for the Caribbean Review of Books–in case you don’t know that’s the new John Akomfrah film about one of the major intellectuals of the 20th century–the deadline dogged me all through my recent trip to New York and back. I finally delivered it today and now feel light as air, positively giddy at the thought that for the rest of the week, i can read what i want, watch what I want and basically lounge about as much as I want. 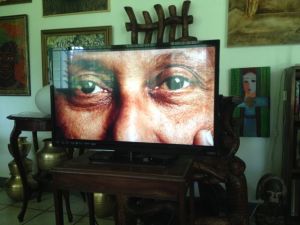 One of the most influential thinkers of the twentieth century, Stuart Hall, was born and brought up here, made his career in Britain, become an intellectual powerhouse there, and is virtually unknown in the land of his birth.  So true what Jesus said: A prophet is not without honour, save in his own country. Ah well.

Here’s a handful of links to articles in case you want to know more about him:

Jazz fan, hipster and a leftwing hero; the remarkable journey of Stuart Hall

From 50s migrant to 80s Thatcher critic, the cultural theorist has long led the debate on race and politics. A new film charts his life and his decades-long influence on the culture of modern Britain (UK Guardian)

Stuart Hall: “We need to talk about Englishness”

Born in Jamaica, Stuart Hall is the éminence grise of the British intellectual left and one of the founders of cultural studies. He coined the word “Thatcherism” and, aged 80, he remains one of our leading thinkers. (New Statesman)

And from Caryl Phillips’ 1997 interview with Hall in Bomb magazine:

Stuart Hall was born in Jamaica in 1932 and came to England to study at Oxford in 1951, as a Rhodes Scholar. His curriculum vitae is an awe-inspiring document. The list of publications, honorary degrees, awards, and teaching positions span 24 pages. A sociologist, writer, film critic and political activist, his achievements are an extension of the work of a man he greatly admired, the Trinidadian intellectual, C.L.R. James.

I remember back in 1979, during my final year as a student at Oxford, contemplating whether to take the low road toward a career as a writer, or stay on the academic high road and attempt to put some more initials after my name. Stuart Hall, at that time Director of the Centre for Cultural Studies at the University of Birmingham, was the only person that I wanted to study with. I applied to his Centre and then, at the last minute, changed my mind and opted for the low road.