A discussion of The University of the West Indies’ peculiar policy towards sexual harrassment on its Mona Campus. 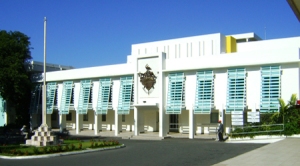 Everyone agrees that in order to deal with a problem you first have to acknowledge it exists. I thought of this when listening to Camille Bell-Hutchinson, University Registrar, energetically refuting the charge that gender-based violence is out of control on the Mona Campus of the University of the West Indies. Today the Letter of the Day in the Daily Gleaner is from the University’s Director of Marketing, Recruitment & Communications, Carroll Edwards. Like the Registrar she denies allegations of rampant attacks on campus women made in a Sunday Gleaner article dated February 1, 2015, ‘Halls of horror: gender-based attacks haunt UWI, Mona’.

The denials come in response to a study cited in that article quoting Taitu Heron, currently National Programme Coordinator at UN Women Jamaica, who chronicled some of the reported cases of violence against women on the campus in her 2013 study Whose Business Is It? Violence Against Women at UWI, Mona. The study, conducted  while Heron was a lecturer at UWI’s  Institute of Gender and Development Studies, used data compiled from incident reports  made to the Office of Security Services on campus. Records showed 67 reported incidents including stalking, physical assaults and domestic disputes.

Astonishingly this was categorically denied by the UWI registrar who stated in the media “…while the university cannot say sexual violence does not take place on campus, the university has never had a report of sexual harassment on any of its six halls of residence.”

Remarkable! If this is true it is a huge feather in the university’s cap. Its security arrangements are so good that not one case of sexual harrassment has been reported–EVER. I hope the University’s PR and marketing department is making lavish use of  this extraordinary ‘fact’ in advertising the campus and the excellent security that obtains there to potential students.

Considering how prevalent sexual harrassment is on virtually every other University campus in the world this should also qualify UWI Mona for some sort of global award–for it has NEVER had a report of sexual harrassment on its campus if the Registrar is to be believed. I would imagine that the University’s gender specialists and social scientists have done considerable research on this amazing state of affairs so that it might lead the way in showing other universities how to manage gender-based violence on their campuses.

Returning from UWI’s alternate universe to the one described by Ms Heron, much of what she reported sounded alarmingly familiar. I still remember a women’s group on campus in the early 90s putting up posters inviting concerned individuals to a forum to discuss the many violent incidents female students were facing on campus with a view to forming some sort of strategy that would provide women with better support than was then available.

Before the meeting could be held an edict was issued by the administration. There was to be no such forum and all posters advertising it were to be taken down forthwith. Organizers were reprimanded for jeopardizing the ‘good reputation’ of the university by holding such a discussion in public and ordered never to do it again.

Very little appears to have been done by the University to upgrade the security of female students between then and 2007 when the attacks grew so flagrant that another women’s advocacy group took the matter of female security on university campuses to parliament. A Gleaner article detailed the issues:

Rape, a major problem at UWI – advocacy group
April 12, 2007
Complaining of a disturbing number of rapes and other forms of sexual offences on the Mona campus of the University of the West Indies (UWI), a female advocacy group on the campus is calling for special legislation and other measures to combat the problem at all universities in Jamaica.
The recommendation was made yesterday by the Society for the Upliftment and Advancement of Women Via Education (SUAWVE), a group based at the UWI’s Mary Seacole Hall, during a presentation to the joint select committee of Parliament considering legislative changes relating to sexual offences.
Real-life incidents
Lanoy Crumbie, president of SUAWVE, related three real-life incidents on the campus: In the first incident, she said a female student attending a party on campus was gang-raped by male students from her class, who videotaped the assault. Student number two was raped by her male study partner in his on-campus bedroom, after they had finished studying. The third student was raped by a classmate, whom she had invited to her bedroom; but he flatly denied that it was rape, since she had invited him to her room and, by her own admission, he did not use physical force.
Crumbie admitted, however, that none of these incidents had been reported to the university authorities or the police, citing the victims’ reluctance to undergo the “trauma” associated with rape cases.
Responding to the report, Joseph Pereira, deputy principal of the Mona campus, also made clear in an interview with The Gleaner, however, that these incidents had not been brought to the attention of the university administration.

Heron also cited SUAWVE’s 2007 initiative to Parliament in her paper. In its submission to Parliament SUAWVE noted the prevalence of ‘acquaintance rape’ as a particular problem at UWI’s Mona Campus.

“Shortly afterwards”, as Heron notes in her paper, “the Student Group was called into the Prinicipal’s Office and reprimanded for bringing the university into ill repute”. Heron concluded “The primary concern was not that the incidents of violence against women occurred but rather that speaking about it in an open forum made the University look bad.”

Nothing much seems to have changed between the early 90s and 2007 or since in the University’s strategy for dealing with problems of sexual harrassment. Suppressing information and preventing potential victims from mobilizing support for themselves or discussing the problems seem to be cornerstones of its policy towards sexual harrassment. In another incident I’m aware of two girls narrowly escaped being raped by a mob of young male students at one of UWI’s Halls of Residence at Mona. When a student newspaper tried to publish a report on this incident, in an act of blatant censorship, they were ordered to drop the article from the publication immediately. How women are to take precautions when much needed information is suppressed in this way is something an institution of higher learning such as UWI needs to explain.

In the same vein a few years ago some female students called up Ragashanti’s virally popular Newstalk 93 talk show to complain about rape and sexual harrassment threats they faced on the Mona Campus. Ragashanti was sympathetic, urging them to speak freely, only to be hauled up by the administration who ordered him to cease and desist from holding conversations on the subject of female vulnerability on campus. The virulent arguments between Ragashanti and Rodina Reid, a senior campus administrator, originated over this matter.

Recall also poet and writer Stacey Ann Chin’s vivid description of the near rape she suffered in a bathroom at UWI.

What is consistent in all of this is the University’s tactic of demanding and imposing silence on victims and potential victims of sexual harrassment on campus while at the same time doing very little to secure the safety of its female students. It was striking that in her appearance on Newstalk 93, University Registrar Bell-Hutchinson insisted there were hotlines for students to call in case of trouble though she was unable to provide the number when pressed by the host to announce the numbers for the benefit of students who might be listening.

Also striking is the emphasis placed by senior UWI management on the lack of reportage of sexual harrassment incidents as some sort of vindication of its reputation rather than recognizing it as an extraordinary situation that requires immediate investigation. Instead of claiming proudly that the university “has never had a report of sexual harassment on any of its six halls of residence” or that “these incidents had not been brought to the attention of the university administration” let’s try and find out what is preventing such reportage, let us then put systems in place to facilitate female students who are being victimized, and let us immediately stop this foolish strategy of censorship, cover-ups and bullying of advocacy groups who are legitimately attempting to solve problems the University has been more concerned to deny than address.

Finally no more of statements such as this: “The UWI, Mona, also rejects the allegation that the issue of gender-based violence has not been accorded priority by the campus.” Had this issue been prioritized as it should have been as far back as 30 years ago it wouldn’t keep returning to haunt the university today.

25 thoughts on “Sexual Harrassment and UWI: Can we talk?”